Hijab, Headscarves and Freedom of Choice

I used to teach ESOL to 16-19 year olds in Bristol; it was a mixture of migrants, refugees and asylum seekers with the full spectrum of difficulties you can imagine. It was the most difficult job I've done, working in institutional, organisational circumstances that were far from ideal. But they were also the nicest, most lively people and it was often a joy to teach them and the people I worked with directly were all committed, hard-working and transparent.

We had people who were literally just off the boat, and we had people who had been in the country for years, but various things (like the education system as it stands) hadn't worked out for them. Identity politics was live and real at the college, but wasn't quite like you read about in books. It was confused, mixed up and had a hundred social, cultural, religious, political, national and regional reference points.

Dress was always a key thing, especially among the girls, many of whom were of muslim background. I remember one girl in particular, who had spent five years at Cary Grant's old school, Fairfield High. She told me of how she used to wear 'Western' dress to school - and how she got harassed by both her Somali friends and other students. She'd be getting told what to wear by everyone.

It was fascinating to see the politics of dress and how girls would influence each other. There would be those who would gradually loosen their headscarf or take it off altogether when they did sports- and if one took it off, then the others would follow. But then in other years you'd get the ones who would toe the party line and berate anyone not doing likewise- and then even getting girls to do sport was an effort in itself. There was always an unofficial power struggle going on with some people trying to impose views that had come from outside; from siblings or parents or the mosque.

Reina Lewis writes about this in her essay Hijab Stories: Choice, Politics, Fashion (in Fashion Cultures Revisited) Lewis talks about the complexity interweaving of identification connected with wearing the hijab, in both the positive and negative sense. It identifies it as both a positive choice and a generational choice, and talks about how hijab-wearing can be generationally 'upward' as well as 'downward.'

Lewis also touches on the idea of the idea of a non-consensual wearing of the hijab which is hugely relevant in countries where there is a compulsion for women to wear a particular type of dress, where it is enshrined into law and punishable by sanction.

(picture above from a demonstration against forced wearing of Hijab in Iran, 1979, I think) 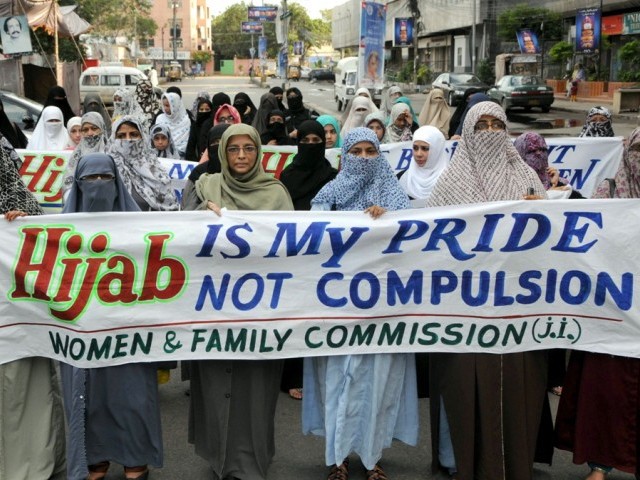 Picture above from National Hijab Day in Pakistan. Er, yes. Read about it here.

One of these countries where Hijab is compulsory is Iran, which is where Amak Mahmoodian comes from originally. Now she lives in Bristol (it's Bristol week on the blog) and has used different strategies to record how Iranian women preserve and express their identities beneath the head scarf, how control is enforced and resisted. Shenasnameh (see above) looks at collected passport pictures (and these are really impressive as a collection - his project is still developing) and how identity is presented on a photographic, individual and state level. The project below is called Gereh and looks at the tying of head scarves and what is expressed through that.  .. and the one below.

I also asked Amak a few questions about her projectsThis is what she said.

Photography is the most pertinent medium for me, because of its relationship to reality, its indexicality and its traditional links to documentary.

The photographic and the video content of my project explore the cultural and the social life of   Iran, with an emphasis on religion, gender and identity.  Using a structure that evokes the classic Middle Eastern collection of oriental stories, my project explores the subtleties of everyday life in contemporary Iran and specific codes of conduct that influence a person's behaviour, relationship and sense of self.

I am trying to examine the modification that had taken place in Iran since the revolution in 1975, the condition of women, social censorship and diversity. My main theme is the visual representation of feminine identity, and in particular the notion of double identity as evidenced by the strong contrast between the presentation of the feminine in public and private spaces.

Therefore I show a woman's photo to you, you see her, the same woman that I am seeing. Her secret is at least penetrable by someone, for me and for her. You can also get to know this woman through the photographs.

This woman could be my mother, my teacher, my friend or even me, myself. In fact my subjects are the ones with whom I have been living for years and this project is the narration of my life too.

The woman who I represent in different projects ;  False face, seal, Determinate, knot and videos,  she is not voiceless, she talks without using a word,with her scarf's knot, her fingerprint, her necklace and her silence. A small part of her being can show how different  she is from the others.