Holes in Hedges and Buildings

'weirpearls': the flickers of light from a splash of water

Robert Macfarlane is a word collector. He collectors words that describe the landscape. And when you have a word for something, it changes what you see in the world. It makes it visible and it heightens your senses to what is around you.

In the same way, if you don't talk about something, if you skirt around it or remove the vocabulary from the language, your world view loses a particular perspective.

In this article in last Saturday's Guardian, Macfarlane wrote about the change in language in the Oxford Junior Dictionary, how words like kingfisher, heron and acorn were being replaced by bullet-point, attachment and blog. How a basic lexis that assumes just a modicum of familiarity (and delight, because that is what you feel when you see the blue flash of a kingfisher) with the natural world being replaced not just by a technology-centred lexis but one in which the very idea of passion, delight or creativity has been eradicated in favour of a bland, numb, conformist way of seeing the world.


Macfarlane isn't interested in this language. He collects words that take you out into the land and makes you see it in a new way, but one that is also instantly familiar to anyone who ever leaves the city. Words like smeuse, which '...is an English dialect noun for “the gap in the base of a hedge made by the regular passage of a small animal”'

'Shetlandic has a word, pirr, meaning “a light breath of wind, such as will make a cat’s paw on the water”'

You hear these word and you start seeing them all over the place. Or feeling them, or looking more closely at what is in front of your eyes and wondering what that something could be called. What is the word for the bumpy flow of water over a rock in a stream, or the pearl like shimmers of water splashed into your face, or the blow of the sea breeze on your underarm hair on a summer's day when you're sunbathing on the beach. And when there isn't a word for something, isn't it an excuse to invent one, especially when it is something as recognisable as this:

When Gerard Manley Hopkins didn’t have a word for a natural phenomenon, he would simply – wonderfully – make one up: shivelight, for “the lances of sunshine that pierce the canopy of a wood”

After reading the article, I went for a walk in the valleys where I live and started seeing things that were familiar, but didn't have a name. And I wondered what their name would be. The possibility of language enriched what I was seeing and experiencing. Macfarlane believes that if we don't keep this language alive through the richness of an experiential lexis, then the landscape becomes a 'blandscape'. It becomes a dead corporate site in which to grow bullet-pointed wheat and commitee-crammed chickens.

Experience leads to language and language leads to seeing. And seeing leads to photography. There are many people who work tangentially with these Macfarlane ideas; Paul Gaffney and Andy Sewell spring to mind as photographers who combine the experiential with the psychologeographical. And there's Dominick Tyler who does it in a more direct way with his Landreader Project. Here he matches up landscape images with old and regional landscape terms to create a visual/lexical glossary.

But it is difficult to preserve that gut-placed experience of these words in photography. There is something primal about them, something seasonal and sensory. They are landscape-sense words that connect into a dark part of our lizard brains.

So I wondered about what photography project connected best of all to this idea of language and sensation and history and then I saw Thom and Beth Atkinson's project, Missing Buildings. Well, first of all I saw it and kind of thought nice, but I haven't got £100 to buy a special edition - so no thanks. 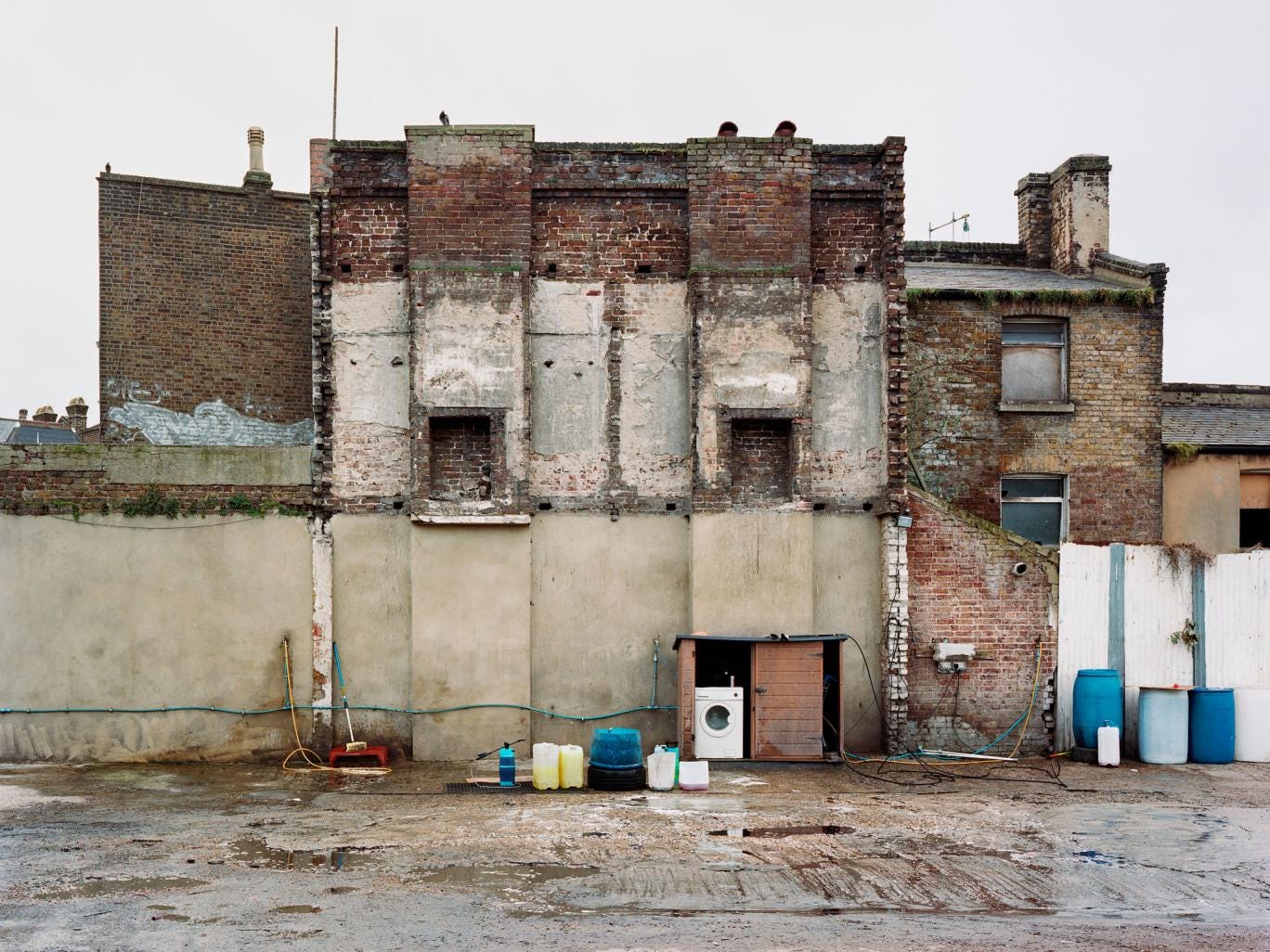 But then I heard Rudi Thoemmes of RRB Books and Photobook Bristol praising it to the hilt. And because Rudi is no mug, I gave it another look and clicked through the updates and the texts. That made a difference.

Something that hadn't quite registered before clicked into place with this little text by Jem Southam.

Growing up in Britain in the 1950's meant journeying through cities still full of bomb craters, piles of rubble, vacant lots and the fascinating spectacle of homes sheered off along one end. Wallpapers, doorways, fireplaces were all exposed and added a surreal and almost decorative element to the urban environment. That so many such sites may still exist has been brought home to me recently by the brilliant typological series sought out and photographed by Thom and Beth Atkinson.

You had those bombsites and ruins in the 1970s and the 1980s too. And I saw them  But it had never occurred to me that they still existed into the 1990s, the noughties and the twenty-tens (?), even though I see these reminders on a regular basis and they self-evidently do exist. And have been photographed existing.

So it's an example of photography providing evidence of something and changing the way you interact with your urban environment. It's an urban smeuse if you like, but instead of a space made by animals it's a blank wall or empty space made by bombs. It deserves a better word than Missing Buildings. BombGap?

Atkinson's photographs hint at the gut-wrenching violence of what happened to these buildings, the reason there are all these blank walls and dead ends. But it is the paintings and photographs that are shown on the Missing Buildings fund-raising website that also add a sense of trauma to these contemporary dead spaces, and trail of dusty footprints that go all the way back to the realities and mythologies of the Second World War and the Blitz, but also resonate in the same way that Macfarlane's sensory landscape words resonate; by touching on the grand narratives that are hard-wired into us, home, flight, fire, and death.

‘When it is all over, a few of the wrecked buildings might well be left as permanent ruins… To posterity they will as effectually represent the dissolution of our pre-war civilisation as Fountains Abbey does the dissolution of the monasteries.’

Back the project here.
Posted by colin pantall at 09:30