I was shocked by these pictures of those murdered by Al-Shabaab at Garissa University in Kenya . It had been toppish story on the TV news for a few days, and pictures had been shown of the outside of the university, with maps to indicate how close the region was to Somalia, and how distant and isolated it was.

In the days following the massacre, some newspapers ran profiles of some of the people who had been killed for their religion, or more for what their religion wasn't. But none of it quite hit home like these pictures.

People say all the time that we can't be shocked anymore by pictures of death, that we are numbed and immune to what they depict, and that's true when the pictures (or reporting) is lazy and just slips into generic massacre tale-telling.

But I never feel that to be true when the picture brings us closer to death and gets something across as the ones above do, or specifically the picture of the classroom.

The first picture shows the people lying dead in a classroom. They've been shot in the coldest of blood and all around them lie empty chairs with those little side boards that you write on, and a frame underneath where you put your books and your bag and your bottle of water. You know exactly where you are in this picture and you know exactly who's been killed.

There were four attackers, only four, and the result of what they did, the scale of what they did is evident in the picture of the bodies in the courtyard. These were students that were killed, who were living and working in classrooms and dorms on a university campus. We connect the two pictures and the language of the space works together to tell us what happened and how it happened.

None of the other pictures I saw in the newspapers or television, the pictures of security forces or sirens or frightened students ever got that across. It was just blind chaos that was more about the failures of the Kenyan army and police. Nor did the graphics, the maps or the analysis. Nor even the pictures of survivors being rushed away from the scene told any kind of story. It all just fell into an undifferentiated morass of news reporting, reporting that never really told you anything, supported by footage and pictures that said less than nothing.

But the classroom with its chairs and its mass of bodies; that made a difference to me. Somehow, Garissa stopped being a remote place near the Somali border of which we know little, and the people shown became much more real. The woman in the red dress; what did she study, who did she love, how tears have poured from the eyes of those who mourn her poor, murdered body. Or the man in the back with his hand up. You fan feel his pain, his bewilderment, and you wonder at who he was, where he came from and what he would have become. Pasts and futures haunt these pictures. There is something there that takes us and reminds us both of what has been lost but also points a finger at those who committed this crime.

There was a hashtage on twitter (#147notjustanumber ) for the Garissa killings, which had the intent of making the 150 (I think that's the latest figure) people killed more than  just a number.

But numbers are all around and so is death and so often the two overlap. Numbers conceal the human cost, reduce it to something abstract. The number of those killed in the Nepal earthquake at the weekend currently stands at 3,000, but that's just a number. It doesn't really mean anything, except when it is made to.

Sometimes the point is to show that a number is just that - a number. This is a picture of a coffin that was widely circulated (on Duckrabbit - and there were variations in other places) following the latest Mediterranean sinkings of  boats carrying migrants. 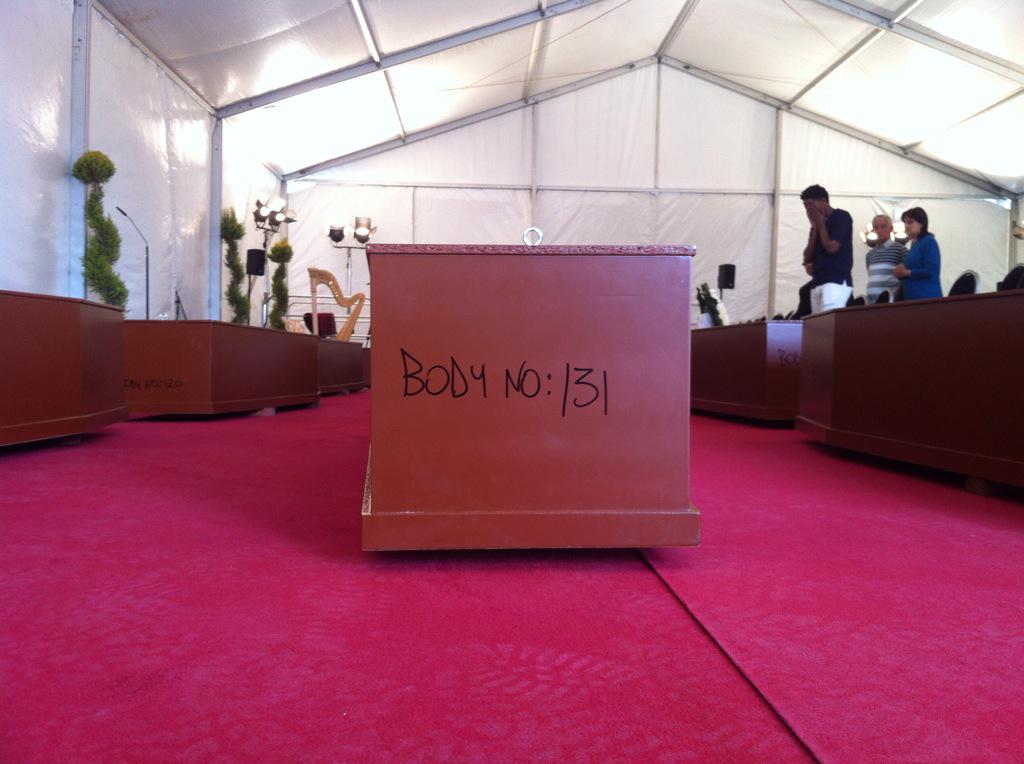 It's a picture that lays bare the cold venality of the way we use number to list lives that don't matter. You get lots of pictures showing rows of coffins but they don't touch the raw nerve that this one does, because this is a picture of one coffin, one number, one person. This is photography of a process - of how people are reduced to mere numbers on a box (or a cockroach).

Yes Colin. Me too.

What the classroom picture showed me was - there was order, young people doing as they were told, to lie face down, side by side, with their friends. And then were cold-bloodedly massacred. That inherent contrast between compliance and carnage shocked me profoundly.

That one image speaks volumes about obedience, betrayal & murder. Not just numbers. That's a personal loss to each family, but it's the catastrophic loss to the wider communities that their education would serve that saddens me too.

I saw that coffin image number 131 as well, used it too, tried to give some sense of scale to the numbers of people drowned whilst seeking refuge in the Med:

Ah. thanks John, that's where I saw it. I was looking for it everywhere.

Yes, good points about education - that loss of education and that hostility to education is also there - and that's the other target. Because the kind of violence and prejudice thrives on ignorance. Education is always the enemy.

My Lai, Jonestown, Rwanda- we can't bear to look at them, certainly not long enough to learn from them.