Homes and Gardens for the Age of Austerity

The Gardener by Jan Brykczynski  lovely book about allotments, gardens and the given and found growing spaces of Nairobi, New York, Warsaw and Yerevan. It's about allotments on the edge, most of which aren't quite allotments but are something more makeshift, temporarily seized from the chaos of deserted places.

But The Gardener isn't just about the edges of the city and the creation of mini-plots of agricultural. It's also about how those plots are contained, about the poles, planks and bathtubs that make up the furniture of these plots. It's Homes and Gardens for the Age of Austerity.


The book starts with a picture of a garden in Warsaw, link-chain fencing and a house door marking its boundaries on the left of frame, with an apartment building dominating the right. So the scene is set and we know what we're dealing with.

Next up and we're into Yerevan (perhaps) and a frame for vines rising above a back alley, It's makeshift frame made up of steel piping, scrap wood and offcuts that merge with the barbed wire and telephone cables topography of the sky.

This chaotic lattice work is echoed in further sculptural concoctions; a collapsed grid of pipework from which rise a crop of mange-tout, a fenced off courtyard garden in which the gardener stands (and guards) complete with silver armband, and a deserted plot marked off with rusting bed frames. 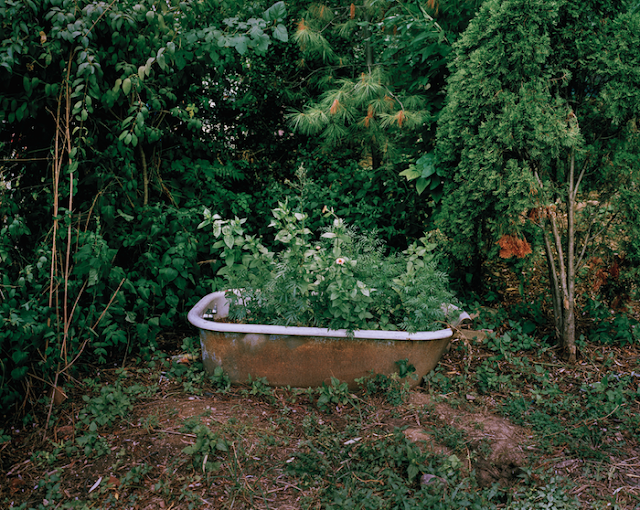 There's a bathtub in the middle of this one, and bathtubs are repeatedly seen throughout the book, but then so are the bed frames, oil drums, tyres and old bedsheets.

These are not bijou plots then with $100 taised beds. Sometimes they are chaotic by necessity, sometimes you get the feeling there is an old-school stubborness that consciously resists the idea that a garden is a place for consumption  These are anti-corporate gardens then that stand against the Homebas-ification of the allotment and. They are, for the most part, scrappy affairs which are sometimes carved out of semi-derelict land, made with scrappy seeds that have the ability to grow in even the most hostile of circumstances. These are street plants growing in street places. They're plants from the 1970s and they relish the semi-dereliction of it all. And to partner that semi-dereliction is the junkyard affect of so much of the allotment furniture.

But there are some more tidy places, in New York mostly, and there are plots where the repurposing of the land has gone beyond the simple growing. The book ends with a picture where night is falling. Apartment buildings glowing in the background while in the middle of the frame there is that familiar bathtub. Nothing is growing in it, it's a reservoir. There are drums filled with vegetation, a vine, and a fence made out of sticks. This allotment holder is living the dream! And topping off that dream life is a shack made of white tarpaulin with a glass-fronted door. The lights are on and we can see inside. There's a cooker and a microwave and windows and wires. Is this is a home away from home, or a home that has come home? Which comes first here? The land where the flowers and the food grow, or the dwelling that seems so much more than a simple garden shed? Or do they both exist together, forever and ever, until death do the human race part?


The Gardener won the Syngenta Prize which was awarded by Syngenta. A very nice book, but what about Syngenta? Protestor killings, bee-killing insecticides and amphibian feminising herbicides are just a couple of hotspots you hit when you google their name.

For all its right-on credentials, I wonder if photography isn't in fact cheap and easy buy
http://blogs.nature.com/news/2013/08/eu-insecticide-ban-triggers-legal-action.html