all pictures by Simone Donati from Hotel Immagine

You sold me to an old man, father
May god destroy your home; I was your daughter

These are landays, 2-line poems from Afghanistan that 'have long been used by Afghan women as a secretive form of rebellion' (read more about landays here). The ones above don't hold back and provide a view of life that is harsh, uncensored without the involvement of the self-justifying male filtering mechanism (of the 'actually, women have a lot of informal power, bla bla bla' kind).

The landays hit the spot and they're brutal. After reading those poems, the reality of being fucked by a 'shrivelled cornstalk black with mould' has been made a little bit more real to me. It's a terrible image and the poem is drawing the big picture without flinching or worrying about anyone's sensibilities being hurt. There is no consideration for whoever might get upset by these poems, because however upset they get, their pain is but a pinprick compared to those women sold by their fathers, uncles and brothers into sexual bondage with 'cornstalks black with mould'.

After reading about the landays on Saturday morning, I got Simone Donati's Hotel Imagine in the post. It's a book about the popular iconography of contemporary Italy melting into their equivalents in politics.

So one way of looking at is is as a project about Italian identity in the new millennium. The starting points were two projects, 'Welcome to Berlusconistan' and 'Padre Pio Cult' that Donati did as individual editorial projects. But once these were done, Donati started to think about Italian society as a whole, what it had become and how it could be represented.

So there are images from fascist marches, pictures of fans at the Napoli training ground. and contestants queuing up to audition for 'Grande Fratello' (Big Brother), as well as images showing Italian crooners ('melodic singers'), race fans, and election night celebrations.

Individually the pictures are a survey of the collective Italian crowd mentality and they are straightforward a documentary/step-backs from a photojournalist approach, the opening up of the mise-en-scene that is repeated throughout the book.

So we see priests preparing for a prayer meeting at a football stadium attended by Mariya Pavlovic, a visionary who sees the Virgin Mary. Mixed in with that a stripper performs at a Grand Prix meeting, and we see Karima El Mahroug (Berlusconi was convicted for having sex with here when she was underaged), sitting sad-faced in the private are of the 'Paradiso Club'. 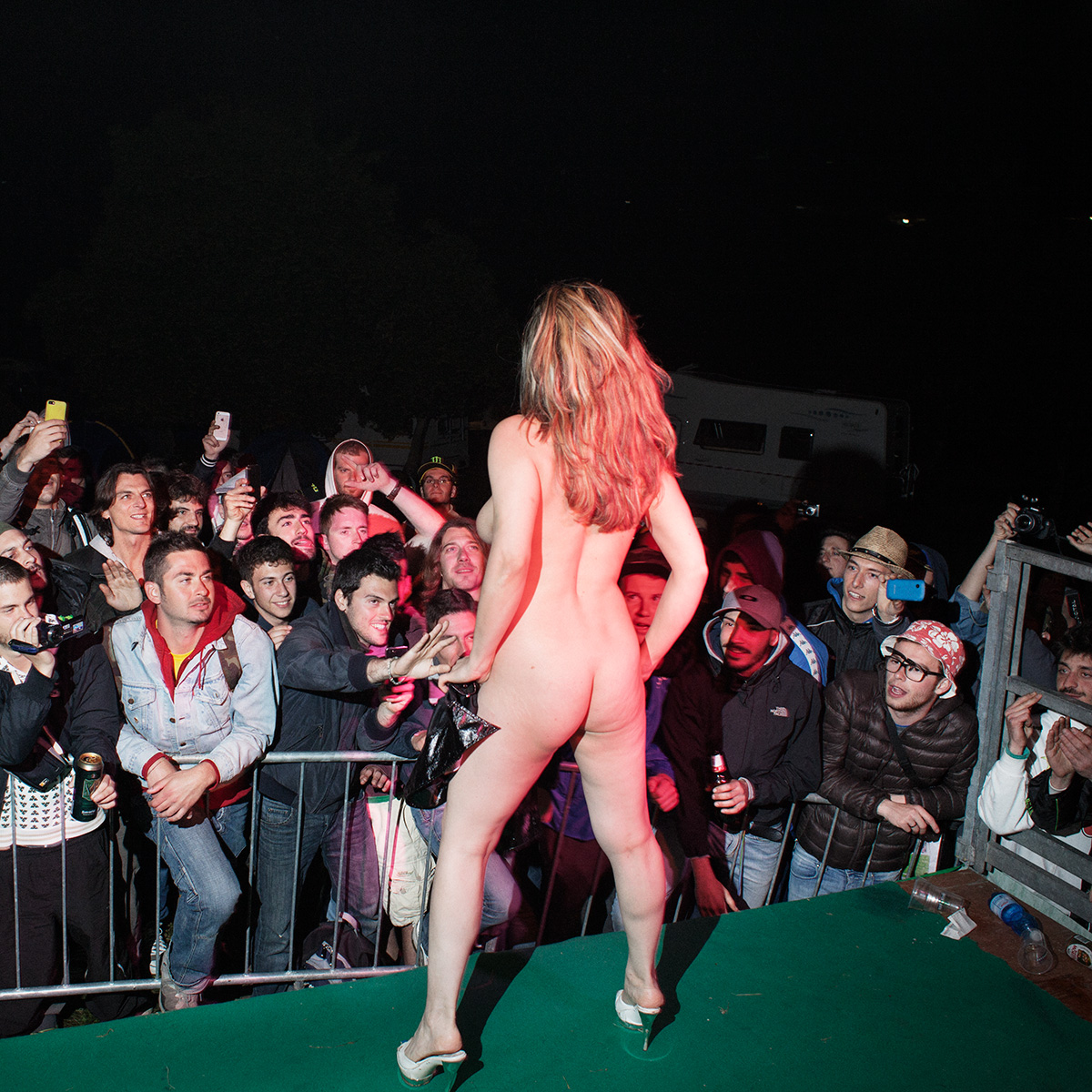 So it's fascism, politics, music, soaps, reality TV, and religion. There's sex and corruption and once you start adding it all together it ends up being an extreme cynical idealisation of Italian life. This is stupid Italy and maybe it's my imagination, or maybe it's me projecting the disgust you repeatedly hear Italians express for aspects of Italian life, but after a couple of viewings, it's almost as though Donati is spitting the pictures out.

There seems to be a disgust in there; at the triteness of it all, the easy fall into adulation, the upsurge of fascism, the seduction by a twinkly smile or a pair of breasts, the dumb populism, It's a book that answers the question, How Crass is Italy? And the answer is This Crass! And This Stupid!

Donati nails, in a very direct way what is wrong with Italy. Hotel Immagine is a book that could be paired nicely with Frederico Clavarino's more allegorical Italia O Italia, a book I describe as '...a deeply pessimistic book, one that uses the symbols of the past to relate the slow tragedy of a dying present. And in the end that isn’t just the story of Italy, it is the story of everywhere.'


Of course you could do the same thing for other countries. How Shit is the USA, France, China, Nigeria, Brazil, Australia, the UK?

Ah, the UK! It should be like shooting fish in a barrel. We do crap with a small c-, and without the compensations the Italians have (food, art, weather, architecture - we lose) But the cultural depictions of this country's crassness are constrained by a certain affection for its popular pastimes and traditions. Go to Only in England, the Tony Ray-Jones and Martin Parr show and there's a rooting of the images (which are Fantastic fantastic!) in the history of Pagan history, Wakes Week, Mass Observation and American street. It's kind and not savage at all in comparison.

It would be nice if it were savage. There is a lot to be savage about. We currently have a government that is dismantling the welfare state, employment laws, and human rights in a manner that rides roughshod over 150 years of campaigning and progress. The British people have bought into the dehumanising of the poor, the sick and the disenfranchised and embraced the values of a commodified, property-centred culture that is built on a bubble of imported corruption, greed and venality.

You can speak to pretty much anyone who works in photography and there is a recognition that this state of affairs is not represented. Nobody is doing those broad brush strokes on what it is to be British or English, on the snobbery, self-interest and cruelty that is devastating this country.

You can see this at all levels. Every year Source puts out its annual survey of student work. There are some great projects in there (from the University of South Wales where I teachs, Mira Andres, Sebastian Bruno and Isaac Blease have done some great work), but you can go through the different universities and colleges and there is virtually nothing on what is happening in the UK on a larger scale.

I appreciate that not everybody is interested in doing this kind of work, but when the absence is on such a scale, one wonders if there isn't some kind of systemic blindness to the world around us. There is little that is passionate, angry or concerned. And on such a scale it's a Roger Irrelevance in photographic form.

It's the kind of irrelevance that Tom Wolfe wrote about in his introduction to Bonfire of the Vanities, He talked about how back in the seventies he waited and waited for somebody to write the great American novel dealing with great American problems; the decline of the cities, social conflict, racial strife, the political class.

But nobody wrote it. American novelists were too busy dealing with the death of the novel, the death of the realism and their response was to come up with different kinds of novels - 'Absurdist novels, Magical Realist novels, and novels of Radical Disjunction'.

Wolfe waited and waited for somebody to write the great realist novel but it never came. So he wrote it and that's how Bonfire of the Vanities was born. It's a story in which story-telling and realism come together perfectly. It's entertaining, savagely funny, but comes with a bitter heart of cynicism and a cold gimlet eye.

Hotel Immagine has a similar bitter heart and so do the poems featured at the top of this post. So that's Italy and Afghanistan covered. But what about Britain? There's plenty of bitterness here, we're drowning in it. But what about the photography? Where are our landays, our Bonfire of the Vanities, our Hotel Immagines? You get the feeling it to is wallowing in its visual equivalents of  'Absurdist novels, Magical Realist novels, and novels of Radical Disjunction'. Which is all well and good but of little interest to anybody beyond the photographers themselves and the photo-world of which they are part.

I think if we want to get an audience and have a voice as mentioned in last week's posts on the Golden Age of Photobooks, then we need to think about the grand narratives and what is actually happening in our world. Donati and others are doing that for Italy. It would be nice for people to do it in the UK (and thank you Zed Nelson for your piece on property in London). And maybe think about it a bit. And get angry about it a bit. And have an opinion about it a bit. And not be afraid to do so.