Patrick Hutchinson rescues a man from a beating

Patrick Hutchinson by Dylan Martinez (Reuters)  Perhaps the defining image (the fall of the Colston statue was the defining event) of...

The Vienna Photobook Festival: Why Make a Photobook?

I really enjoyed Vienna Photobook Festival and the books I saw, talks I heard and people I met. The festival is big and more focussed on the booksellers than the talks (with the exception of the William Klein one), but I really enjoyed all the talks I saw which gave a great overview of the creative process; Olivia Arthur, Ania Nałęcka​, Nicolo Degiorgis, Michael Mack, Andreas Bitesnich, the panel discussion on photobook collecting which gave another perspective on photobooks - as did the talk on book arts and unique book objects (editions of 1) by Walter Bergmoser and Peter Sramek.
And that is what made it so interesting for me; that march up the photographic food chain, with bookselling rooms that went from unique books to artist's books, from small presses to independent publishers, trade, before finally ending up at the top rare book dealer end of the market.

I felt like Candide in there, all wide-eyed and unknowing. Because when there is such a range of books and places, you are unknowing. Going through the rooms, you got the feeling of the shifts between editions, pricing, market, perspective and audience but with a passion for books that was evident at all ends of the spectrum and from all regions. There was a big eastern European presence there, which gave you the feeling that the UK is not very visually sophisticated. Though that feeling was redressed by the fact that my two favourite books there were/will be published in the UK.

It does feel a bit odd at times and, as you went through you felt the weight of capital sliding up the scale. I'm a bit neurotic about money, mainly because I don't have any, so by the time I got to the dealer rooms, I started feeling a bit like Nemo when he's hanging with the sharks who have better skin and better suits; it was a mixture of envy and wondering if there were any bags of £50 notes (or even better 500 euro notes) that I could avail myself of.

The festival is free so you got a few thousand people walking through. Non-photobook people attend talks and buy books, and if you're skint and like photography, price is not a barrier -  you can attend and look at books. Photobook Vienna has healthy sponsorship by various people, including the collector, Peter Coeln. There's a generosity there and a sharing of work and ideas and art that is very simple and direct. I find the whole historical/collecting obsession rather spectral (as in being on the spectrum), but when it feeds into creating a wider audience, it is a great thing. It gives something back and it broadens interest and that is something generous. It's a massive undertaking to organise and run a festival and even though there is always a commercial interest at some stage, it's done through a passion for art and the medium. I talked to some Viennese photographers about the festival and they mentioned how this was the one time in the calendar when they felt part of a bigger whole, that the world opened up to them and they opened up to the world. And that is something rather wonderful.

Why Make a Photobook by Ania Nelecka Presentation

There was also a book dummy review at the festival. The first prize went to Mark Duffy (pictured above in a wet plate by Borut Peterlin), with his fantastic dummy that was based around pictures of damaged posters of Irish politicians. It fits into the corrupted image idea, but was made out of a corrugated plastic tied together with heavy plastic tags. It's a book you could take into the bath. 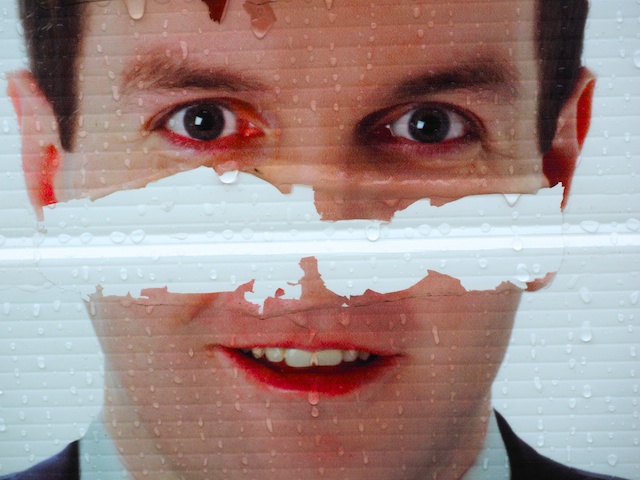 I was reviewing books there and came complete with an overcooked tagline. It's difficult because you see 12 people in a day all of whom are coming from completely different places, so you have to shift your brain constantly.

Making a book is a long, painful and expensive process comparable to simultaneous ripping up £50 notes into confetti and flogging yourself over the back with vinegar-tipped brambles. You have to know (or get to someone who knows) photography, design, paper, printing, construction, binding, writing and so on. And you have to have a bag of £50 notes. Why anyone would do it is beyond me.

So as a reviewer, what are you reviewing for? Is it for the finished book, the possible book, the ideas, the design, the energy, the openness, the story or a bit of all of those things. Or what if you see a dummy that is rough in every way, but there is some brilliance in there? And what if the pictures are great but they're not best-suited to a book? What do you do then?

Stories, originality and energy are the thing and there were some great stories among the reviewees. They weren't always fully realised but that's part of the process.

Mika Sperling came in with a beautiful series of pictures looking at a German-speaking Mennonite community that lived in the Ukraine, was exiled into Siberia by Stalin in the 1930s, moved to Germany in the 1990s and has now divided with the conservative elements moving to Manitoba, Canada.

Most interestingly, Sperling is a (lapsed) part of that community. She was born into a Mennonite community in Siberia and as she photographed in Siberia, Germany and Canada, she found her own values come under scrutiny from the communities she was both part of (she had family in them) and was photographing. So there's the missed perspective of a woman in there. There's been lots of photography of Mennonites, but has there been any from within the community -  that combined that dual insider/outsider view? Though Ian Willms comes close with his beautiful project Why we Walk (thanks Lucy!).

Simon Brugner did a project on the Arsenic Eaters of Austria; it's a simple story with a brilliant hook; the old custom of eating arsenic to ward off disease and stay young.

And last but definitely not least is Libuše Jarcovjáková.She was born in Czechoslovakia but got out to Berlin in 1985. Her dummy was an autobiography, of the boyfriends, bad jobs, rough flats and hardships of being a woman in the new west. There were lots of pictures and a text that had a sensitivity and a vulnerability that you hardly ever see. And somewhere in there is a really great book. But it wasn't anywhere near finishing. But one day it might be. I hope so.
So thanks to all the reviewees for showing their books and their ideas. Their pictures are shown below.

That's it for photobook festivals for a while. Not sure when the next one is. It would be nice if there was a small, underfunded one somewhere, perhaps near a beach, where chaos and goodwill reign. No. Oh well.

Hi Colin, you asked if there had been any photography of Mennonite community combining an insider/outsider view, and one project I can think of is Ian Willms of Boreal Collective's "Why We Walk" - http://www.ianwillms.com/whywewalk#1

Thanks Lucy. That looks really good.