Casita De Turron: It's messy and it's weird It's one of those real/fictional interplays that tells the story of Andrea and Angel (the photographer's niece and nephew) and what it is to grow up, to be in a family, to live through the chaos of becoming adolescent (the statement mentions the 'uncanny' and the 'oneiric' but let's leave that behind so it doesn't spoil things). 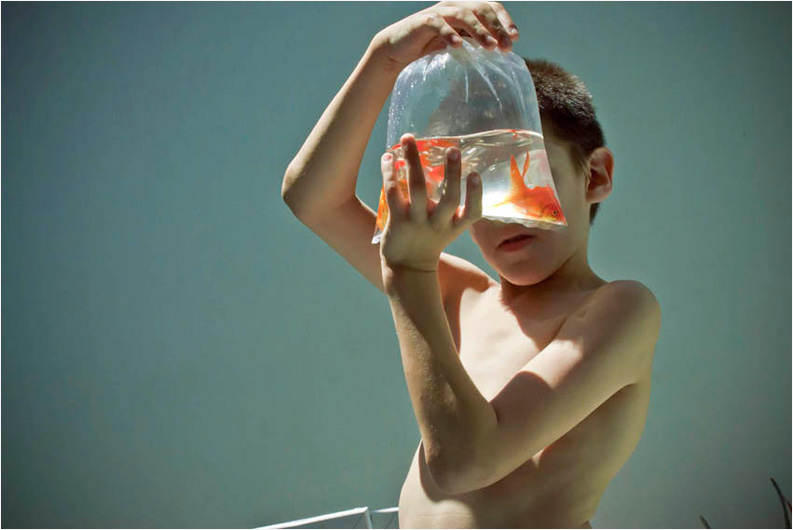 The best way to sum it up is to describe it as a mix between the work of Alessandra Sanguinetti and Timothy Archibald, but not as tidy and with added oddness thrown in; Andrea and Angel wear thick-lensed glasses and are more than happy to perform in whatever situation. Andrea stands above a fan in her party dress, Angel kisses a mirror and holds a cat. The two of them appear together, Andrea sitting on a bed looking mature, typewriter by her side, but with scraped knees and Angel standing behind her. He's got no shirt on and his head's thrown back, his hand over his groin, a latter Michael Jackson. It's rough as you like but it has the energy and madness in there that is so often absent from more filtered depictions of childhood. You know there's a dark side to these children, and it  you know that they know it. You also get the feeling that Tondopó is not entirely in control, that the pictures go beyond sanitised dreaminess and have a bit of madness in them. Which is a good thing. Control is the enemy.

The interiors are interesting too; real grubbiness and rough decor with plenty of wildlife to add to the general messiness. If you have indexed shelves and dust-free floors, this might not be the book for you. If you are more human and live in a bit of a mess, then it might be.  The textiles and drapes add to the atmosphere as does the underlying ambivalence of sibling alliance and sibling conflict.  It could be shorter, or sequenced differently, or designed differently, or lots more.

But it isn't and really it doesn't matter  because it's not that well-mannered a book. Or that simple a book. It's a bit of a mishmash in some ways, but there are mishmashes and there are mishmashes, and this is the latter; a mishmash. A good one. It doesn't look like a junior school science book. That's nice for a change.  I like it.