If you want to know how bad it was to be a child in 1920s USSR, read this article on an exhibition of Soviet children's illustration in the Guardian here. And you can visit the exhition in London here.

A New Childhood is at the House of Illustration, 27 May–11 September.

The designs are wonderful, but, as this statement illustrates...

In 1925, Galina and Olga Chichagova illustrated a two-panel poster that called for a revolution in children’s illustration in the new Soviet Union. The left panel featured traditional characters from Russian fairytales and folklore – kings, queens, the Firebird, the witch Baba Yaga and, my favourite, a crocodile in elegant nightcap and dressing gown. “Out,” read the caption, “with mysticism and fantasy of children’s books!!”

...there was a downside. You get the feeling that kids books in the USSR weren't exactly Mog or Mr Gum or The Tiger Who Came to Tea. Literacy might have massively improved but the magic of childhood?

Although it should be noted that “The bourgeoisie, well aware of the force of children’s books, took advantage of them to strengthen their own power … We struggle and we die, but before we drown in our own blood, we must seize these weapons from enemy hands.” 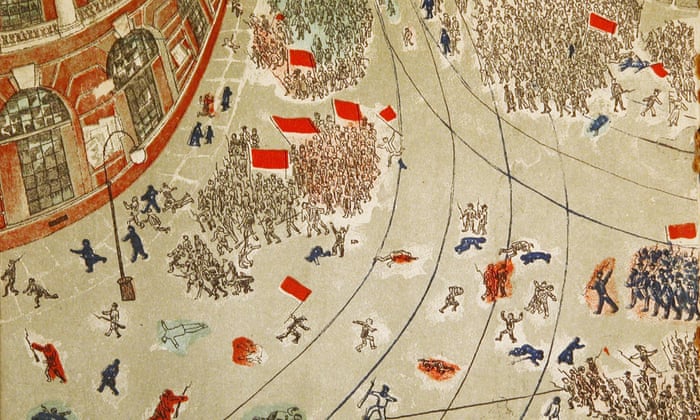 In the story, the black square joins a red square that represents communism and both head off on a dialectical space trip. The two flat shapes crash to Earth causing destruction in three dimensions – a kind of abstractionist depiction of the Bolshevik revolution – from which emerges a new Earth built in the red of communism.

You can read about it in much more detail in The Charnel House here.

Or there is a really nice Guide to the book here with translations of all the pages - reproduced below but do go to the original source for extra links to related materials. 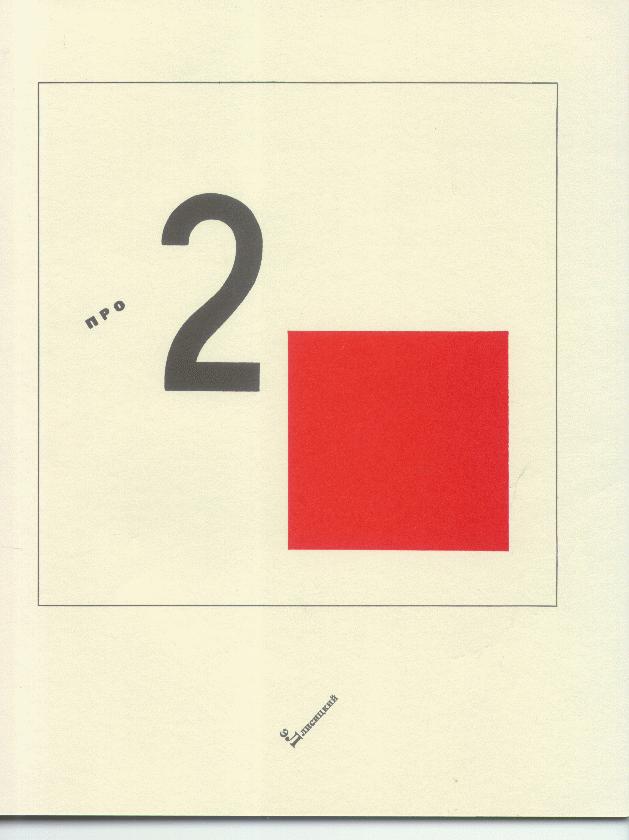 Front Cover: In a thin ruled rectangle in the top four-fifths of the page are three elements, the Russian word "PRO," meaning "About" or "Concerning," the arabic numeral 2, and a red square. Below the title is the signature of El Lissitzky, printed at an angle, with the first and last names sharing the letter "L."
Lissitzky was very careful with his choice of colors--the intensity of the red square is finely tuned for a psychological contrast to the black square and text. Your computer monitor might not render it as well as the printed copy. Note also the dynamically varying angles of the signature and the word "PRO".

Lissitzky wrote at about this time, "Today we have two dimensions for the word. As a sound it is a function of time, and as a representation it is a function of space. The coming book must be both." Since, he wrote, "the words on the printed page are learnt by sight, not by hearing," he chose number and image on the cover, and only used a word, "about," because he needed it to signify his meaning. 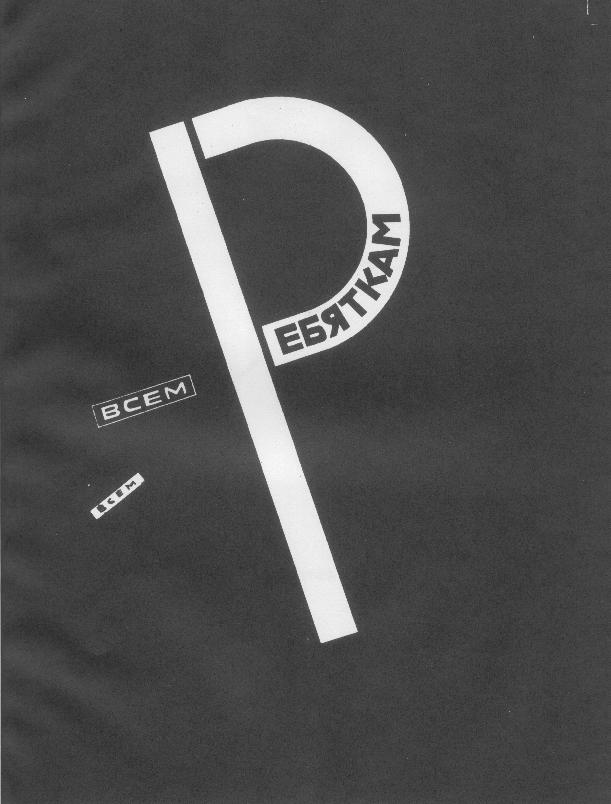 Dedication Page:  To all, to all children

The initial "P" (Latin "R") of "children" is a huge capital letter, emphasizing the sound. The words "to all" are repeated and angled, as if emanating from a radio broadcast. (Railing points out that war radio appeals always began, "TO ALL ALL.") Radio was a fascinating new technology.
This page is black and white; on the other side of the signature, the endpaper is all black. The space of the book is emphatically enclosed. 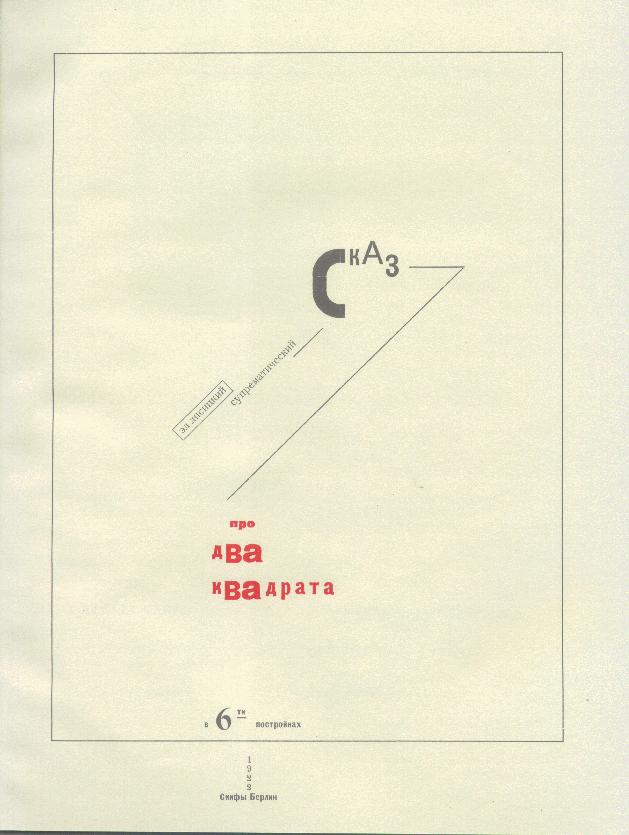 The movement of the eye reading the slanted text seems to reproduce dynamically the sound as in a radio announcement. The emphasized similar parts to the Russian words for "two squares" (BA BA) is an example of Lissitzky's innovative letter typography. He wrote, "From the passive, non-articulated letter pattern one goes over to the active, articulated pattern. The gesture of the living language is taken into account." (Typographical Facts, 1925)

"Suprematist" refers to the art movement in early Soviet Russia that succeeded cubist-futurism and was associated with constructivism. 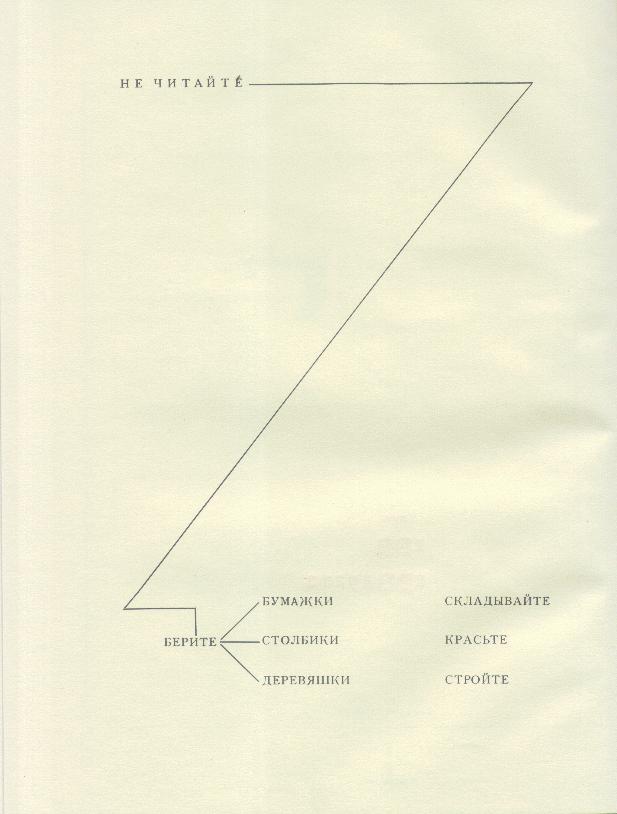 In another zig-zag, we read the joke, but also receive a little summary of Lissitzky's artistic philosophy, one that was used at the Vitebsk institute and independently at the same time at the Bauhaus. It is more than Montessori: it is the leap from passive reading to active construction, from the two-dimensional paper world to the three- and four-dimensional real world. 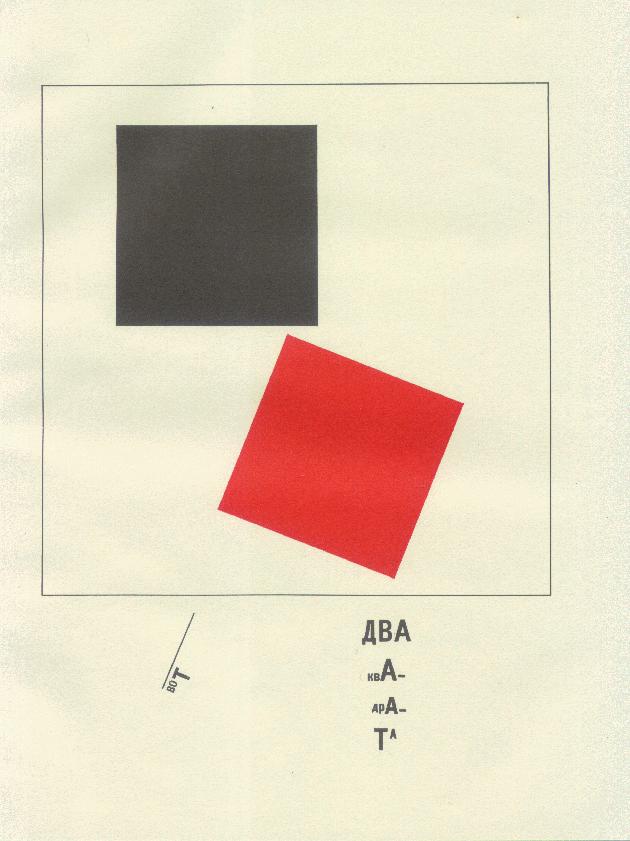 Below the red and black squares are the text in modern sans serif type, angled. The black square sits parallel with the margins, and the consonant "T" seems to be standing still. In contrast, the red square is tilted dynamically, and the letter "A" is emphasized and repeated, smaller each time. Lissitzky: "The pattern of speech becomes increasingly concise, the gesture sharply imprinted. It is the same for typography." 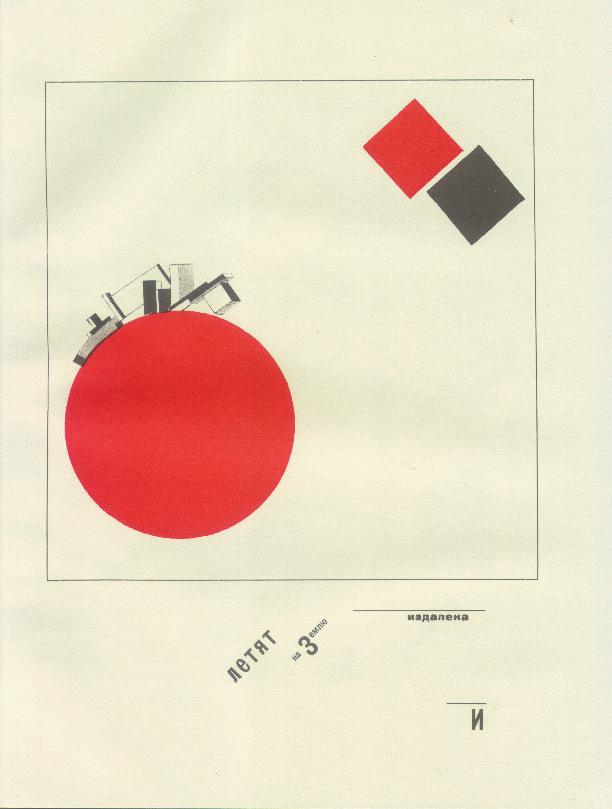 The red and black squares, both tilted and close together, seem to approach the Earth, which is represented by a large red circle, with some abstract constructions rising from its upper circumference.

Beneath, the type has an angled "flying" and "toward earth," and a horizontal "from far away." At the bottom right, the single vowel sound "and" points to the next page in time. 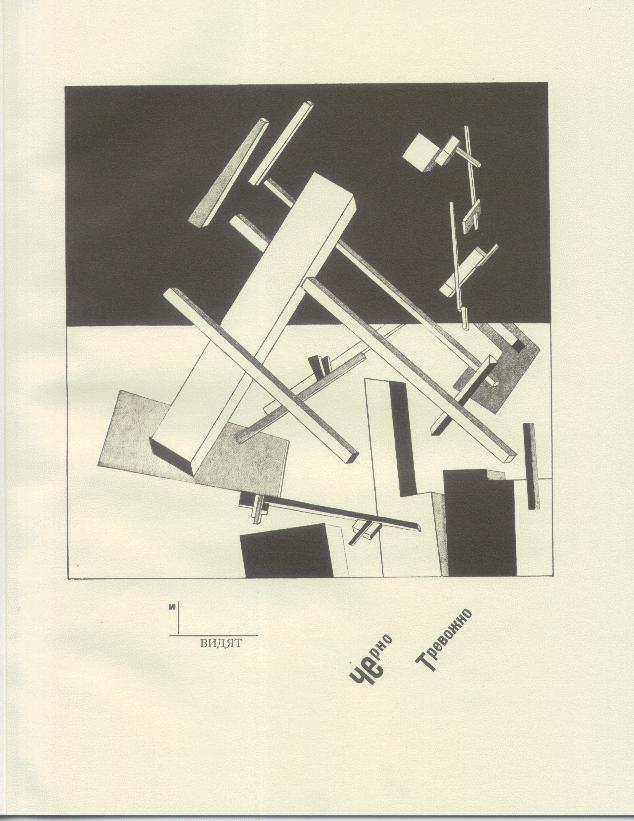 And they see a black mess:  see black Chaos

The black and white picture is of miscellaneous blocks and rectangular or angled objects, all rendered without a unifying perspective or projection, so they seem to be floating in a gravityless space. It is chaotic, and also disturbing, because the eye can't organize the scene logically with light and shadowed areas, front to back, or in any other human order.

The text beneath is again in sharp contrast to the picture. It has become almost telegraphic, with emphasized percussive consonants, and the words "black" and "alarming" set perpendicular to the angle of the blocks. 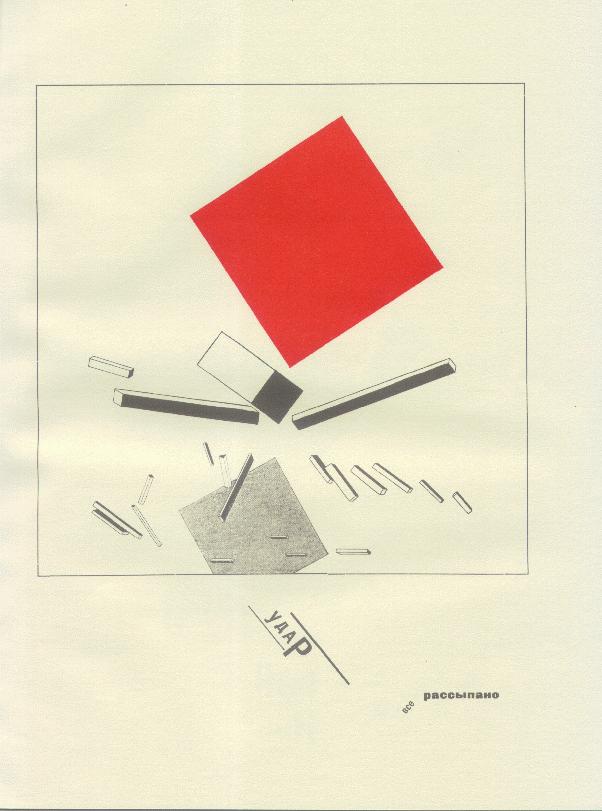 They crash and scatter everything: crash -- all scattered

The sharp corner of the red square falls down on the black and white worldly objects and scatters them. The impact seems already to have produced some sort of order, as the objects somehow are grouped by size and shape. A gray square provides a stable background to sharpen the impact.
The text beneath has the angled word "crash," with the consonant enlarged, and the word "scattered" set horizontal and some distance away. 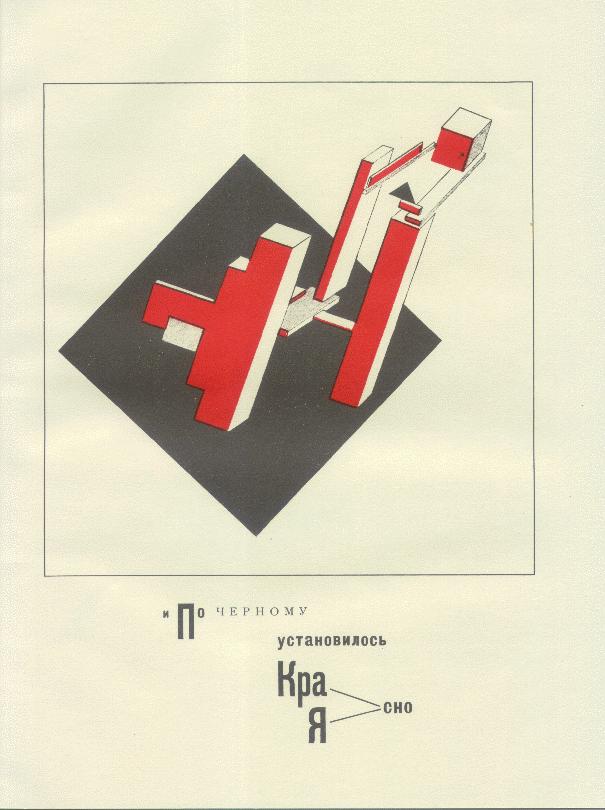 And red organizes a settlement on the black square: and on the Black was established Red Clearly

Here the large black square is a solid but moving base for the reassembled objects, which now are red and white, and organized like skyscrapers in a city. In the middle heights is a small black triangle pointing up.
The text below is stable and horizontal. The phrase "red(ly) and clear(ly)" in Russian, "krasno yasno," shares a suffix, joined in common to both words by two lines. This typographical device is repeated from earlier pages, emphasizing the way Lissitzky is able to transmute words and pictures. The consonants express sharp, energetic sounds, according to Railing. Again the words and images are congruent; Lissitzky's treatment of the letters brings out the sound quality embodied in the words while relating them to the figure. 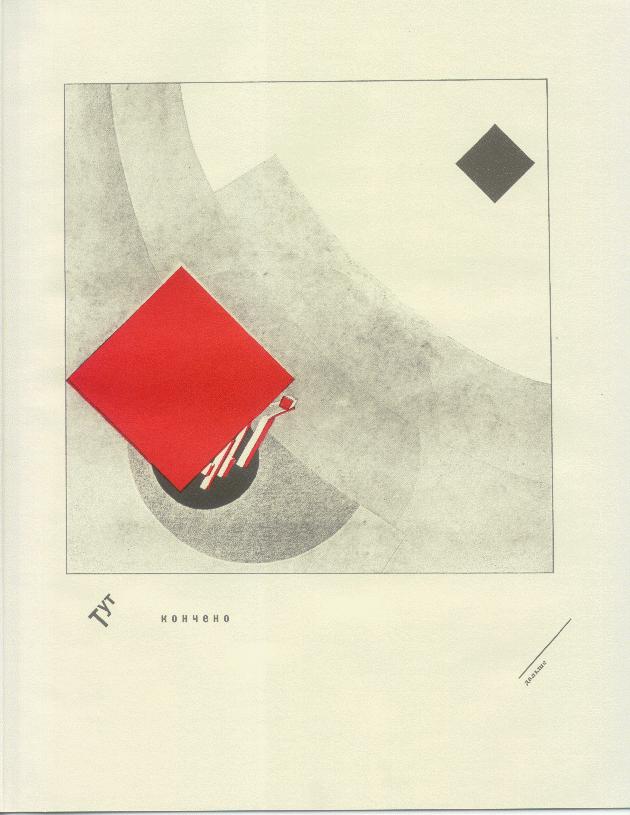 Here it ends. . .and keeps going: Thus it ends -- further

The black square, now smaller, departs the black circle, with its colony of red-white objects. The larger red square seems to be floating above the Earth here. In the background is a series of cosmic arcs or circle segments, expressed as varying densities of a gray wash.

The text is now tiny. Starting with an angled "here" at the left, it has a horizontal "it ended" and, far to the right, an angled "more" beneath a longer angled line. Railing comments that Lissitzky must have carefully placed the words dynamically on the page after, and as part of, his suprematist construction. The world will not die, but a revolutionary fourth-dimensional change will energize it continually through infinities of time and space. (Well, perhaps Lissitzky communicated this more economically and artistically!) 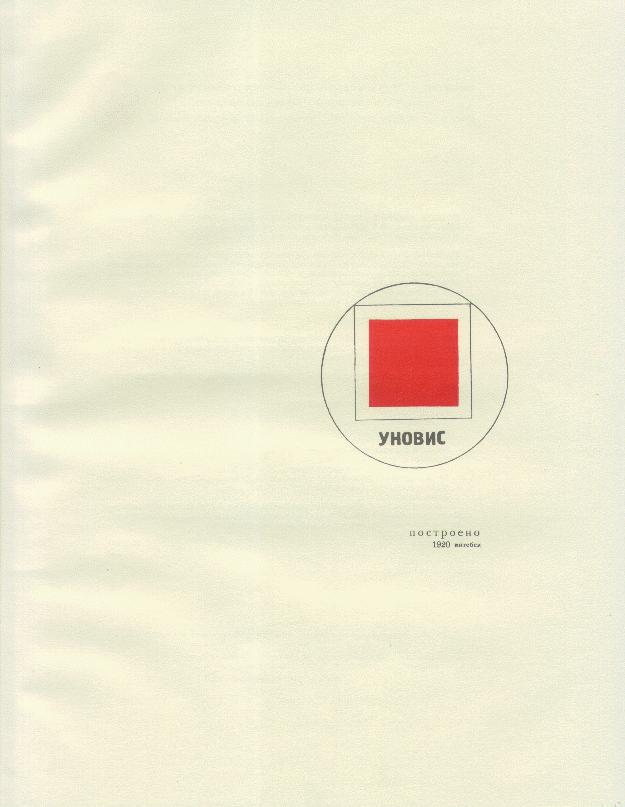 A red square inside a thin black line and circle stand for the art institute UNOVIS. Below, the words indicate that Lissitzky made this project two years before this publication. 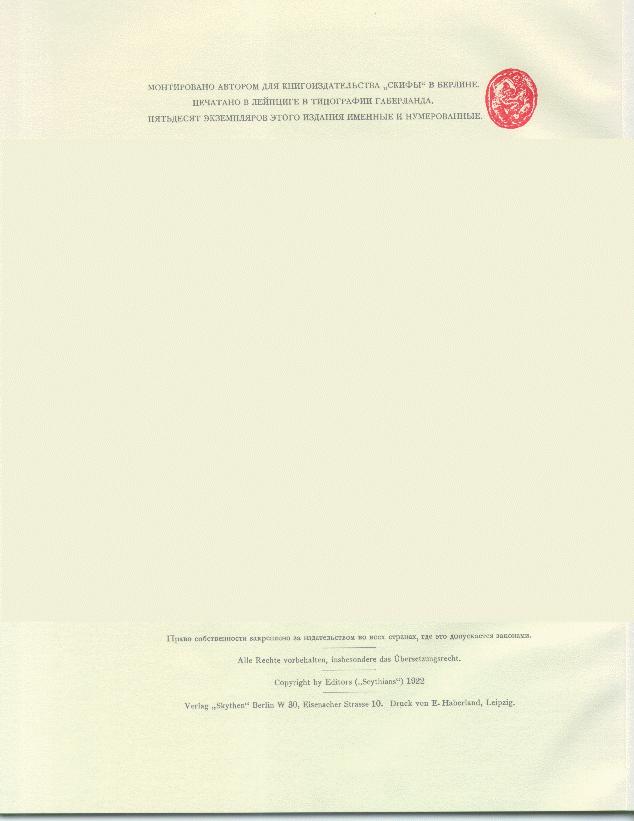 Copyright Page: On the reverse of the colophon, verso, is the text in Russian, "assembled by the author for Sythian Press, Berlin, printed in Leipzig by Haberland Printers. 50 copies of this edition autographed and numbered." Below is the same information we supply at the head of this page.

End paper is black (not shown) 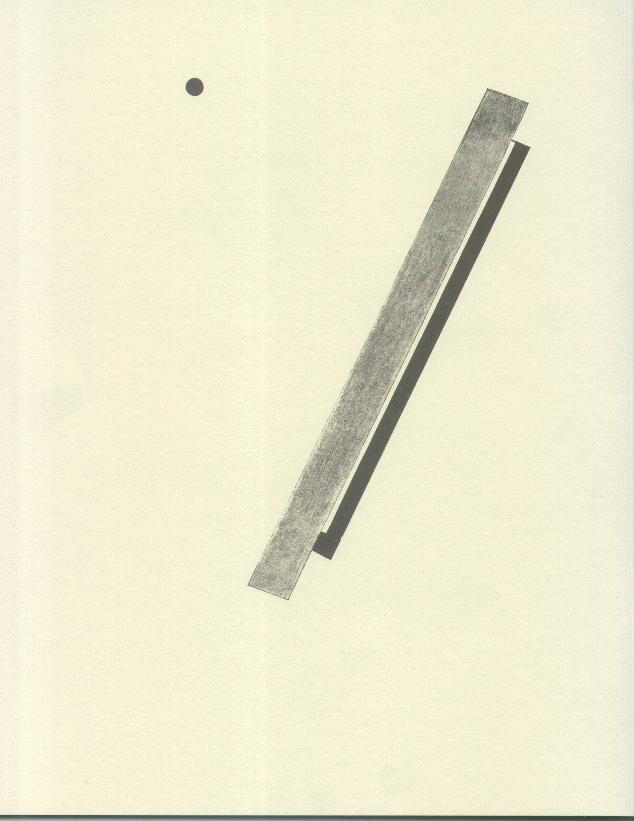 Back Cover: The back cover art shows a quiet but energetic arrangement of three objects. A small black circle at the left is balanced by a large, long gray rectangle at the right, which in turn is shadowed and stabilized by a smaller black rectangle behind.