I went up to Northumberland last weekend, to the strange town of Allendale where my sister lives. We went for a long walk in the countryside, through the pissing rain because that suits the landscape.

It's a landscape of sodden moors, old lead mines, flues and chimneys. There are stone walls, fences, and sheep. And then you come off the moor and go into the woodlands and there are pheasants, partridges and grouse; millions of them.

There are tubs of feed stuck at intervals in this private land, feed that keeps the birds fat as well as stupid, to slow them down enough so that pissed up  city boys in landrovers, or country boys in landrovers, can outwit them with a Purdey, a game dog, and a full-house of beaters.

History is written beneath the land throuigh these mines, through this ownership, through where you are allowed to roam and where you are not. There are divided loyalties, ancient grudges, and diverting claims over this land. You can feel it.

It's feudal country and all around you can see weird marks of this feudalism that run full intoWicker Man (without the fun bits) territory; shot crows hung up to on tree branches, rows of moles strung along fences (go to the bottom for more on catching moles), scores of ferrets heaped in bloody piles.

It points to a different idea of the English landscape than that we are accustomed to. It's bloody, and brutal and you're not quite sure who's being threatened by lines of dead crows and moles. Is it to warn off the moles and crows, or just a reminder to dumb city folk like myself exactly who owns the land.

And who owns the land , and how they own the land is the thing. My friend Deborah Parkin lives here  and has had convoys of 20 land rovers skimming along her road with Prince William waving as they passed. That's a convoy that is burdened with so many assumptions.  Or here's a map showing pheasant densities in England, along with details of who owns what and the environmental costs and contradictions of gamebird farming. And it's all very complicated, right from the question of whether a pheasant is livestock or wildlife (it depends on if you want a tax break or if you want to shoot it. Even law is written for some people's convenience).

So that was where I spent my weekend and then I headed back south and stopped off at services and came back to earth with a a bucket of  man-breast chicken. From one England to another, or are they two sides of the same thing and how do they connect and what does it all mean?

I don't know. But J.B. Priestly wrote a book about England in 1934 called English Journey.

J.B. Priestley’s English Journey is a portrait of England in crisis, a unique document made at the point in history when the prosperity of the Victorian age which had been propelled through the second decade of the Twentieth Century by a war economy, tumbled into the abyss of worldwide economic depression.

Political extremism stalked the south while mass unemployment and the grim desolation of boarded up factories and silent shipyards haunted England’s northern regions.

Priestley’s account of a nation in decline was to influence political thought in Britain for decades and inspire photographers as important as Bill Brandt and Humphrey Spender to venture to the unfashionable north to capture on film the industrial landscapes and the lives of the working people.

And you can read more about that here.

Priestley was asking the kind of questions that would still be relevant now. And John Angerson has asked those questions again in his book English Journey. 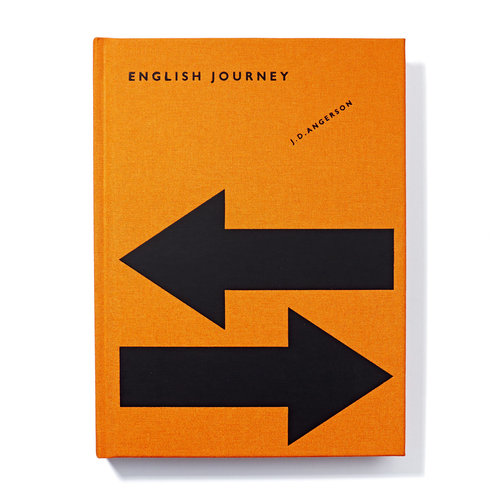 This is a book where Angerson follows in the footsteps of Priestley and finds his own answers to English identity.

Angerson's England is not a rural-urban polarity, it's not north v south, or rich v poor, it's mixed, it's confused, it's a hotchpotch of denuded semi-industrial landscapes that appear in a really beautifully designed book (and isn't it great to see something with design that doesn't look like it was learnt on a youtube  video) that mirrors but diverges from the original.

The pictures are made on a five four Wista, and are then pasted into the book as glossy prints of a size corresponding to the original negatives more or less, and flipped 90 degrees so you need to turn the book to look at them. You have to work a bit to see them in other words. I'm not quite sure why they are printed like this, but it works.

These are quiet pictures, quite flat in their content, but they have a power that goes beyond the surface of the image. There are pictures of docks, hotel chains, American football, a KFC franchise. Liverpool F.C.'s pitch gets a look in - we see only the turf and halfway line. There are images of war, of migration, of Britain's fading glory, of industrial sites repurposed as retail parks or parcel delivery warehouses.

There are migrant workers, wannabe models, call centre workers, and the Adelphi hotel in LIverpool, where passengers for the Titanic stayed before its journey to the bottom of the sea.

Each image is accompanied by a short bit of text that is laconic and cuts to a deadpan chase. These texts add to the images and create a momentum as the book progresses. It's a momentum of questioning and doubt about what it means to be English. Angerson doesn't really give us any answers, but instead takes us on a journey that questions Priestley, himself, and all the assumptions we have about Englishness.

It's direct and it's hard and it goes to places, very quietly, that so few books of English photography do. There's no reliance on the great image, or a well-worn nostalgia, you don't feel like you are looking at something either pre-conceived or from the past. It's contemporary in the extreme, it's unforgiving, and it's beautifully printed and designed.

But you can buy it and see more images here with a selection of 20 different covers .

Oh and if you're interested in mole catchers, there's a whole nother world out there....

'On a blustery Sunday morning, I met Rob Atkinson near his home in Ludlow. Atkinson is the former chief scientist for the RSPCA and author of the natural history book The Mole. Although he corresponded with Nicholls while at the RSPCA and has supported research on mole traps, he came to realise that they had different goals. For Atkinson, it wasn’t enough to find nicer ways to kill moles – he didn’t want them to be killed at all.
Atkinson is a soft-spoken, thoughtful man who has wavy grey hair and a downy white beard, and I couldn’t imagine him harming a single creature. He admitted to me, however, that he was once tasked with clearing moles out of his parents’ garden. He still remembers the excitement he felt when he would see a sprung trap. But, he added, “even, then, there was this sadness”. The landscape, once dynamic and alive, soon grew still. The rain washed over the molehills and they gradually flattened out. “You’ve done what you intended to do, but there’s a feeling that something is gone that was once here,” he said. Moles are in no danger of becoming extinct, but they are a reminder of Britain’s ancient natural history. Unlike other species, such as the grey squirrel, which were introduced by humans in recent centuries, the resident mole has lived in Britain for more than 350,000 years.
In the late 1980s, Atkinson studied the lives of moles while working on his master’s degree at the University of Oxford. He interviewed farmers about their impact, and tracked the movements of moles in the field. He came to the conclusion that mole catching was, for the most part, useless – a practice that should have died out years ago. In fact, scientists believe that moles benefit vegetable crops by turning the soil and eating pests.

And if you want to take a mole hunting course, well here you are.