Some rules about how to take great pictures

How do you know if a picture is any good?

My latest piece on World Press Photo looks at many things, but especially the idea of what good photography is and the rules that we generate to uphold our idea of good photography.

The idea of good photography is tied up with linear ideas of the grid (there is nothing more panoptical than an image fitting into linear frameworks), of orthodox framing and use of light, and a whole range of  taste questions that run across genre and media.

And so you have any number of ways of telling what is a good photograph or is not a good photograph. There's EveryPixel (I've written about this before), a really stupid but addictive app that rates the chances of your photograph being awesome.

On a photojournalistic-conceptual level, there's Max Pinckers' and  Dries Depoorter's Trophy Camera. This uses World Press Photo winning pictures to analyse the likelihood of your picture winning a World Press Photo. And beneath the surface of all this, there is something that is a bit too close to the bone going on. We make pictures that look like other pictures. We make pictures that look like documentary pictures, or photojournalistic pictures, or to get a lot of likes on Instagram. At a supposedly higher end, we make pictures that we think will sell in the art market. We add a graph or a blue dot, or use a blue gel, or turn the picture into a sculpture, because... that's what makes it good right, or will get us a show or a bit of attention, or make us some money. Is that a good thing, a bad thing, or something to run away from.

And if it is, where should we run away to?

There's Ivars Gravlejs' Useful Advice for Photographers, a collection of  Photography Rules (the book was so popular it sold out) which looks at the basic fundamentals of what makes a good photograph - which are actually quite bad, but then are actually good because they are conceptual art pieces. And they also point to what taste evaluates as good or bad so you can see the places where the opposite of good has become good in a particular sub genre or functional area of photography. And of course when the bad becomes good, it becomes orthodox and so is bad again - think the blurred, grainy, out-of-focus thing which Takuma Nakahira was saying was exhausted moments after it was invented.

Nakahira's is just one of many ideas of the exhausted language of photography, and then there are do's and don'ts, cliches to avoid, and there are books that tell you things like>>.


Read this if you want to take great photographs 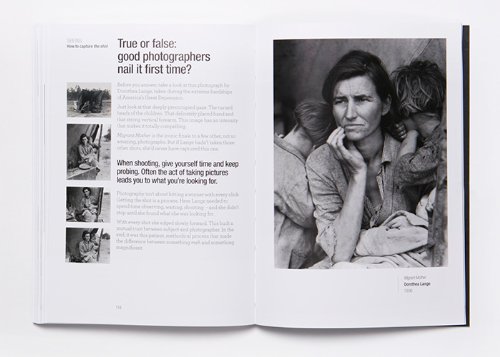 Obviously there's only a 1.8% chance of that book being awesome considering the images they chose.

Then grab your camera and start shooting your way to great pictures.
Look your subject in the eye.
Use a plain background.
Use flash outdoors.
Move in close.
Move it from the middle.
Lock the focus.
Know your flash's range.
Watch the light.

Or you can find Petapixel rules which includes stuff I never knew...

You might not know it, but there is a right way and a wrong way to hold a DSLR camera. The correct way is to support the lens by cupping your hand underneath it. This is usually done with the left hand, with your right hand gripping the body of the camera. This helps to prevent camera shake. If you are gripping your camera with your hands on either side of the camera body, there is nothing supporting the lens, and you might end up with blurry photos. To get an even stabler stance, tuck your elbows into the side of your body.

But it does have this excellent rule.

This seems like a simple one, but pretty much every photographer on the face of the planet has been caught out before. Including myself. The trick is to put the battery onto the charger as soon as you get home from your photo shoot. The only thing then is to make sure you remember to put it back into the camera after it has been recharged…

Er, and there's more as well, and to be honest, most of it is great advice most of the time. The trouble is if you follow any of it, you'll end up making pictures like everybody else. Perhaps that doesn't matter even. The point is to tell a different story to anybody else... and you can do that with exactly the same pictures. So maybe the rules are good, who knows, it's Monday....

Anyway, you can read the article here.