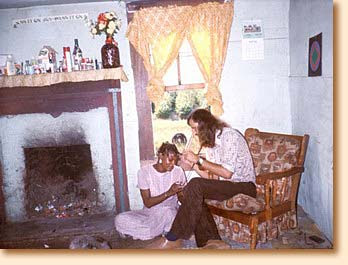 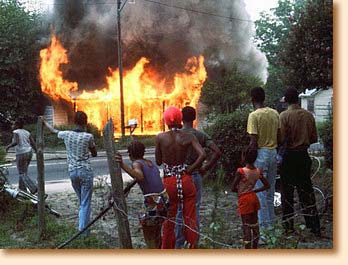 Jacob Holdt (pictured with Mary - that's her house burning) is up for the Deutsche Borse Prize for the Steidl version of American Pictures. Holdt is pretty nonchalant about the Steidl book, saying its publication was down to two curators who wanted a catalogue for a show of Holdt's work they were putting on. The curators were so nice, Holdt just couldn't say no. All Holdt did was go to the receptions and drink the wine.

If you haven't seen the online version of the book, you can see it here. It is phenomenal and chilling work. Holdt reckons its only the hairstyles and cars that have changed in America since he made his pictures, and that his work was made at a time of hope.

The worst place Holdt visited was Immokalee in Florida, a place of slave camps, murder and hopelessness. Immokalee was in the news at the end of last year and not much has changed it seems.
Posted by colin pantall at 09:43

Good to see this work getting some recognition.
Here's a review of the show at the Photographers Gallery:
http://www.independent.co.uk/arts-entertainment/art-and-architecture/features/deutsche-boumlrse-photography-prize-second-sight-775461.html

Thanks for the link.

Wow, you are on a roll! Two days in a row, with two AMAZING bodies of work. Now, to get off the computer, and get back out there on the street.

Anyway, thank you for sharing these links. I'm still reeling from the India project yesterday.

Cheers anonymous - it's a good shortlist. Incidentally, Holdt will be seeing Mary, the woman in the picture, again next week - they still keep in touch.