Philip Jones Griffiths was one of two photographers who shot the destruction of Cholon/Saigon in 1969. The other photographer was the late, great Larry Burrows. The top image is by Griffiths (and converted from colour for Vietnam Inc.), the bottom one by Burrows - that's Griffiths lens you can see in the corner.

Burrows was a true great. His images didn't shy from the suffering on all sides, including US troops - this image is one of his best known (the soldier with the bandage on his head attended the book launch of Larry Burrows Vietnam a few years ago).

Burrows (like Nick Broomfield in his documentary, Battle for Haditha) also captured the psychological damage of war on the ordinary soldier, and no better than in his story "One ride with Yankee Papa 13", a story which showed as directly as possible the effect witnessing his comrades getting killed had on a young soldier.

As Stan at Reciprocity Failure pointed out, images of US and Iraqi casualties of war are heavily censored (both in the US and the UK, though not in other countries) - Stan recommends people google "Iraqi war casualties - photos". The first place that takes you is here .

Not subtle, but so it goes - we are allowed to see the kind of images Griffiths and Burrows made. A short video of Larry Burrows can be found on the Digital Journalist here. 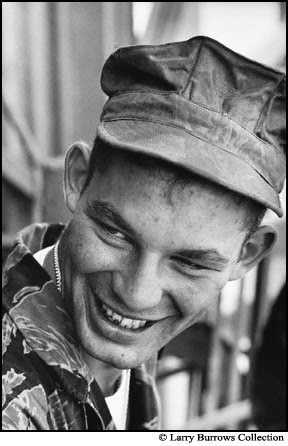 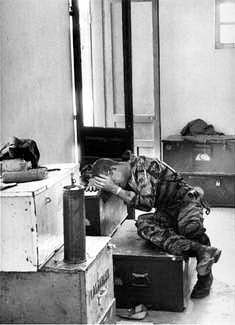 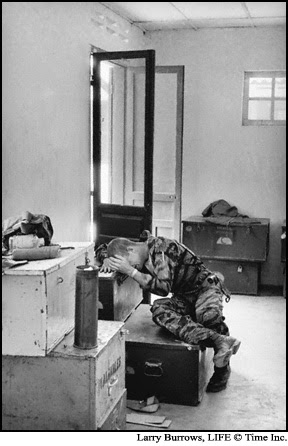 In a photography class I took while at college, the images of the wounded woman were held up in a discussion on the power of colour vs B&W (or vice versa). It is interesting to know that the Griffiths-Jones one was originally in colour. I never knew that..

Hi Tom - I think a few were originally in colour but got converted for Vietnam Inc.

The power of colour in Burrows pictures probably had a lot to do with the power of his images in general (I always think Apocalypse Now looks remarkably like Burrows's pictures) and how little he shot. He thought about what he did - he wanted it to look good I think.

Philip Jones Griffiths is one of my favorite Vietnam photographers, his pictures really show the brutality and violence which happened all them years ago