The thoughts of Kim Jong Phil 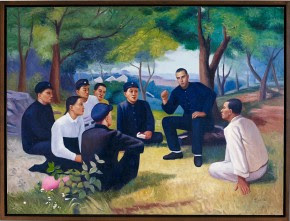 Phil Toledano is productive and imaginative and takes the piss - so a good combination all round. I liked his American Gift Shop and I like his latest project, Kim Jong Phil. The title alone takes it into a different league. The best thing is he's sent snaps of North Korean propaganda posters to Chinese on-demand painters (which I've been tempted to use but never quite managed to dare send a credit card number to) and they've painted the pictures with Phil's face in.

What irks me is that Phil doesn't really have an ideology to go with the pictures and he mixes up Saddam Hussein and Laurent Kabila in with Kim Jong Il - which just strikes me as perverse. Or perhaps I'm just sore that he didn't go the extra mile and use Maoist propaganda posters - the finest propaganda posters to be found.

In any case, Toledano didn't mind any of that. He just said "fuck it" and got on with it - and damn fine he did too. The quotes below are from an interview over at A Photo-Editor.

On top of all this,  his phenomenally popular Days with my Father is being made into a film.

Well, I’m doing a project called “Kim Jong-Phil.” It’s also straightforward.That was a revelation for me, was this parallel between artistic self-delusion and narcissism, and how a dictator is fueled by the same kinds of desires and urges. So what I did was I found paintings and murals from North Korea, photographs of them, and I had them copied in China into 30×40 oil paintings, and they replaced the dear leader with me. So this is a project about me, again, because since “Days with my Father,” everything has been inward facing.


PT: You have to just say “Fuck it.” That’s the best advice I can give to people is to just say “Fuck it.” Just do the thing you want to do. If you want to take pictures of your balls, then take pictures of your balls. I’m serious. I know that’s not the kind of advice that Rob can probably publish, or you can write, but I really mean it. Because the world is composed of millions of people always telling you things you can’t do or shouldn’t do. There’s always a reason “why not” for everything. So that’s why I find this Kim Jong-Phil thing so resonant with me as a person, is because I spent my entire life being a pathological contrarian. It’s a reflex, it’s in who I am. I have to do the thing that I want to do. I just have to do it. And the more people tell me I shouldn’t do it, the more I want to do it.  The more wrong it seems like it might be, the more I’m interested in it. So that’s the thing. People don’t do stuff because fear is immobility. So you just have to be moving at all times. Which is why I’m terrified right now because I have no projects in front of me. “Kim Jong Phil” is done, “A New Kind of Beauty” is done, “The Reluctant Father” is kind of done, so I have nothing in front of me so that terrifies me because I feel like I’m going to start slowing down and I’m going to sink to the seabed.
Posted by colin pantall at 07:24