(based on a true story) - Interview with Eva Kunz 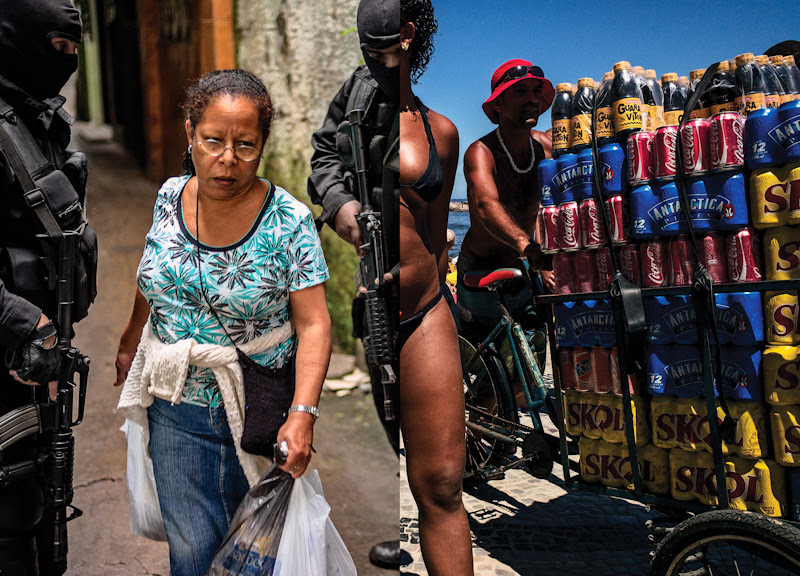 David Alan Harvey's (based on a true story) is my no-brainer book of the year (see my Photo-eye review here). I was fascinated to know how it was made so I emailed a few questions over to Eva Kunz, who (along with David Alan Harvey and Bryan Harvey, produced the book.

What is your job with Burn?

I'm very much focused on BurnBooks. At the moment, I’m working with David Alan Harvey and his son Bryan on the upcoming newspaper version of (based on a true story). It will be distributed for free in Rio's favelas to the people who are such an important part of the story.

How did you get involved with David Alan Harvey?

It was this spirit of "pay back, pay forward" that made me get in touch with David. We live geographically very far apart, but are connected on an intellectual level. Meeting online was the first step.

His Road Trips blog had evolved into Burn Magazine, a venue for emerging photographers, where those with a voice but no name could get a space and the possibility to show their work.

As a mentor and teacher he is always on the look out for new work, always sharing his knowledge and connections. My kind of guy in a mostly self-centered world.

When did the idea of the book first arise?

David is always thinking books. He has a very extensive body of work about South America in general, and Rio de Janeiro in particular.

He was in love with the city and its people, the atmosphere, the mood, the duality of the place, which reflects very much in his own being.

After two years of shooting, the traditional documentary photography part was done, the backdrop set, and he went back one more time to Rio, without constrictions, free from assignments, to take "backstage" every day pictures to complete the book.

This last shoot has become very central to the book, and is completely different from his earlier "Divided Soul", which was also shot partially in Brazil.

What was the first idea for the book?

Rio is too vibrant to be fit into a normal mainstream book, too many emotions, the society too interwoven… one picture on one page, the next on the other, it just did not feel like the right thing to do. So the first idea was that a trade book was just not it.

Rio, as lived and felt by David, was much more like a novela, a dream, a Shakespeare stage… full of passion, sound, emotion, a puzzle to be figured out... Living on the edge was the mantra, to be translated into book form.

How did the physical elements of the book (the beads, the looseleaves, the cord) take shape?

We spoke a lot about how it felt like to be in Rio, much more than what it looked like. Having a connection with Brazilian culture helped me understand.

I had his words in my mind all the time, along with his pictures, the way he composes, uses the space and colours on multiple layers, and his idea of a loose tabloid… prints more than book pages… all of this was in my head like a puzzle.

It all came together with two pictures: a couple sitting on a sofa and a girl lying in the sea, both with legs spread over to the other side of the picture... half and half becoming a whole again. I saw a way to fit the pieces together.

David perfectly knew what he did not want and what he wanted, but did not know how it could be done. I could SEE it, the duality of it, so very well reflected in his photographs.
I made a very small mock up, and from there he and his son Bryan, who is a film maker, did a superb job of taking the whole idea on a completely different level, not just looking for complementary pictures, but creating a movie within the still images. Bryan's deep knowledge of his dad and his work combined with his film editing skills allowed to create a sort of Rubik's cube, a mystery that could be read not only front to back, but also backwards and/or cross wise.

Being this an interactive book, we needed to find a way to hold the lose spreads together. Finding paper that could hold the fold, without breaking on the spine, but without giving up the look and feel we needed, has been a tale all by itself. We ended up using the brand which is very close to the one money is printed on.

Up to the very last moment Bryan and I played with rubber bands, eyelets, hooks.. and the string.. the beads to tighten and loosen it was our solution to keep all together without binding. Everything fell into place, pieces of the puzzle completed, in a perfect collaboration.

How did you decide on the 'looseness' of the leaves?

This looseness completely reflects who David is. How he lives, how he works. Rock solid at the essence, but floating in the expression of it. This really is not a book about Rio de Janeiro, but a book about David's vision of it. Or more specifically his use of the traditional tale with a muse/muses.Rio is just the backdrop. That is why the word RIO is never written in the book. You must figure out where this is, you must figure out many things.

"A Shakespeare stage set in Rio" as he calls it. More than a decision, the loosenesss was a natural evolution. The pleasure to look and touch a fairly good sized print, the interactivity of this puzzle, the idea that every one could take it apart and build their own story.

To have the possibility of one story become many many stories… all of this played into the looseness of the whole idea.

How did the edit progress? What was the process and how long did it take?

While still shooting in Rio, one hour photo lab prints were made and put up on the wall of the apartment, and were moved around constantly. During his final month long shoot, the audience of Burn, or better, of theriobook.com, could have an in depth look at the whole process, kind of a live online workshop.

Later, Bryan, Candy Pilar Godoy (his digital assistant in Rio), David and I worked on the edit once back in NYC, digging into the archives, looking for the best pictures that would tell THIS story.

This was not just an edit for strong pictures, but also a pairing edit, where two pictures had to work together and fit the mood and flow of the whole story. By the end of February the script was set.

What was the rational for the half-reveal of the landscape pictures?

Like music, photography has a rhythm, high notes and low ones.. calmness preceding a crescendo, dissonances resolving... the same we find here, the rhythm, the beat..

The contacts are totally part of the novella development. A way to introduce the six key "characters" of the drama. It also suggests: a film, a movie, a sequential development.

Who's the girl on the cover?

That's Candy Pilar Godoy. This is one of those serendipity moments that rule David's life. His former assistant had to cancel the trip one day before leaving for Rio, so he had to look for a new one right away. His fixer and friend Roberta Tavares, one of the muses and characters of the book connected him with Candy, who then became the central muse.

She was later an editor and now is his assistant in New York.

Spending a whole month with the women all interacting throughout the book has led to an intimate and intricate story.

What was the reason for the postcard clues?

Since there is no text in the book, nothing explaining how it works, we felt that a few words were needed to introduce the mystery and give a heads up that this is more a game and a puzzle than a book.

Was the book tested on people outside the production team?

Yes. We handed the dummy to colleagues, family and friends who would drop by at the loft in New York, with no explanation and waited for their reaction. The response was great.

One of the first people to dive into the dummy was James Nachtwey, whose words were “David, this is literature”. Exactly what we intended it to be. We could go from "there's only the three of us crazy" to "we have something". Great feeling!

How important was the video to the marketing of the book?

Since we're mostly offering this limited edition online and there is no text, it is very important. Piques one's curiosity and explains how it can be looked at, played with.

Were any other books an inspiration for Based on a True Story?

No.. David says his influences were movies like Sophia Coppola's “Lost in Translation” and Nan Goldin's approach of photographing her most immediate surroundings and life than anything else.

How has it sold? What has the reaction to it been?

The reaction has been great, people really "get it". It is amazing. It’s not an inexpensive book - due to the material, the first class printing, and there is so much work involved, from assembling it by hand, to putting on the beads and strings one by one, checking the spreads etc.

The book is selling well in an ascending price curve. It is now in its fourth price upward evolution. The last 100 will be sold at $192, which is $100 more than the first 100, but actually exactly what it was worth in the first place. We expect it  to double in price in the collector market as soon as the last copy is sold. We are getting close.
We're also offering a very limited edition and completely handmade tile box, laid out with unique double-run print sheets, work done by Bryan. Each collector box is different from the other, including a signed print and book.

And, as mentioned above, the newspaper version is being printed, because we are convinced that the work should be seen and shared and enjoyed. This is the most important part.
Posted by colin pantall at 13:09

Neat- if elusive (price wise) and out of reach like the unapproachable girl of one's dreams (the girl on the cover?)

The newspaper version, will it be more widely available?

Strategizing to make the book more expensive and aiming (with glee) for the collector's market. Some sick brains at work there.

Or being a bit more open about what a photo book can be - and it can be whatever you like including an object which is a bit pricey, but nowhere near as pricey as an editioned print or a day rate for Harvey's services...

Collecting? Well, yes... I know what you mean there but at the same time so what, who cares, I kind of quite like that hypothesising over what will sell and what won't - even if I've never sold a photo book in my life.

Tony. When you do the small editions for Straylight, and then you do a reprint, do you call it First Edition or Second Edition or not name it as an edition?