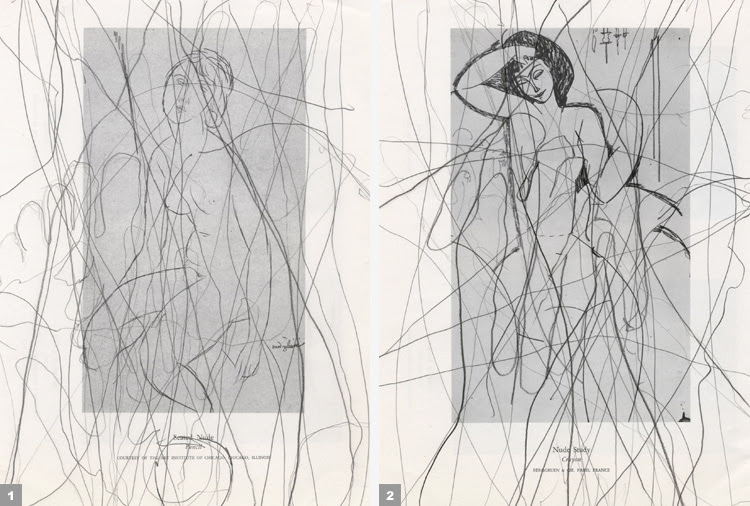 Another article in the papers at the weekend was on Art Attacks at the Tate Britain, an exhibition looking at 500 years of physical attacks on artworks.

I was especially taken with Disgrace VIII (2012) by Kate Davis ( above, with Disgrace V on the right), a series where Davis draws over the "canonical" Modiglani sketch to insert Davis' voice into the overwhelmingly male conversation. This is what Davis says about her work, which is an uneasy combination of both anger with respect.


Disgrace V-VIII is part of a series of works in which I traced the outline of my own body on to Modigliani's female nude drawings. It is one of several pieces in which I responded to "canonical" works by significant male artists. I chose art historical moments where the conversation was very male-dominated; I wanted to insert my own voice into that conversation, and to rethink those artworks or moments through a feminist lens.

With Disgrace V-VIII, I started by tracing my hand, in pencil, on to a female nude by Modigliani, then my arm and carried on round the whole of my body. By the end, I had made this messy web – which comprised a life-size drawing of a real woman's body – over Modigliani's representation of one. And you can no longer easily discern which is his line and which is mine. It should be said, I'm not drawing on an original Modigliani, it's a reproduction from a catalogue. I couldn't afford a real one. But more importantly, there is an ambiguity in this work that underpins it. While I feel frustrated at the way Modigliani represented women – particularly in his pencil drawings in which the woman is often depicted as a vacuous, empty shell – at the same time I am seduced by the quality and character of his pencil drawing. I would never want to draw over a real Modigliani, I'd rather look at it. And while there is certainly anger in this work, there is also a great respect.

The ever-splendid BJP is just out (and it has two stories by me on Max Pinckers and Abelardo Morell) with a major feature on Susan Bright's new book on motherhood, something which I'm really looking forward to reading.

The BJP is running two covers (see below) for different markets which is interesting in its own right. The top cover is also interesting. It's a great cover and a great picture by Hanna Putz, but my wife just about choked on her Coco-Pops when she saw it. "Mother, yeah, right!" she scoffed. "What mothers look like that?"

So I'm keeping my copy of the BJP hidden away - just in case I find my cover of the BJP with pot bellies, sagging breasts, stretch marks and the more usual signs of motherhood scrawled over the perfect Friend-of-Putzian body.

BJP October 2013 - US, Canada, Australia, New Zealand and Middle East cover
In October, British Journal of Photography has two different covers. Because of publishing restrictions in certain countries (North America, Australia & New Zealand, and the Middle East), the cover image by photographer Hanna Putz we chose for this issue would not have been suitable - so we had to create a second cover with an image by photographer Tierney Gearon.

The new issue will be published next week in newsstands across the UK, and days after in all other territories. The October issue will also be available on the iPad (https://itunes.apple.com/gb/app/british-journal-photography+/id635263304?mt=8