#bringbackgoodluck, genocide and the first ever photobomb

I saw this on Twitter the other day (on @DapperHistorian) and I am inclined to believe it with the proviso that it might very well be nonsense or even the DapperHistorian himself. The exposure times don't quite add up.

But it doesn't really matter. Or does it? Who knows? Not me.

Then I saw this. Essentially, the story is how come you have Rhodes Scholarships when Cecil Rhodes was such an outright murderer, racist and plunderer.

Which is fair enough.

But was Rhodes a murderer responsible for the deaths of 60 million people, 10 times the number Hitler killled which is what the text that accompanies the text says.

Come again on so many points.

The Hitler comparison and the questionable numbers weaken the very good idea of ending Rhodes Scholarships because of who they are named after. Because Rhodes really was a piece of shit. Why would you name a scholarship after him?

One excuse is that things were different then, or we didn't know any better. I live in Bath which is next to Bristol, a city which for many years was one point in the slave triangle. It's not something that's properly remembered in Bristol - there's a corner of the M-Shed museum on the slave trade, and there's Georgian House, which is a fabulous museum that was owned by a slave-owning family, but apart from that we only have the streets and statues named after one of the city's great slave owners, Edward Colston, something that a large number of people in the city are still in denial about,

This is what Mike Gardner wrote about Colston.

"Between 1672 and 1689, Colston's company transported more than 100,000 slaves from West Africa to the West Indies and the Americas. To maximise profit, his ships divided their hulls into cramped holds, so they could transport as many slaves as possible. They were stripped and chained in leg irons – the women and children were caged separately and were frequently victims of sexual abuse. Unhygienic conditions, dehydration, dysentery, smallpox and scurvy meant mortality rates for the eight-week crossing were as high as 20 per cent. Slaves who died or refused to eat were thrown overboard.

A third perished within three years of arriving in the New World after a short life of unimaginable horror, flogged and chained and starved until they could take no more, farming the fields of cotton, sugar, tobacco and molasses."

I don't know if any of that can be justified by some kind of hisorical relativism. It's evil all round. You don't need Hitler and outlandish figures to justify your argument in other words. Research and a sense of common humanity will do the job much better. 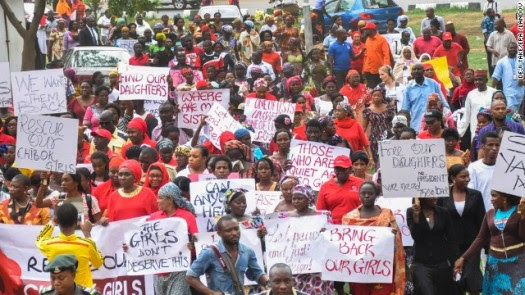 Oh, and while we're on dubious propaganda and slavery, does anyone remember #bringbackourgirls, the campaign from, oh, way back in April when almost 300 girls were abducted in Nigeria by Boko Haram. 219 of the girls are still missing, and the incompetence and disregard shown by the Nigerian authorities is something to behold, even from a very long distance and with a great deal of ignorance thrown in.

So imagine how offended people were when they saw this re-election poster for the Nigerian president, Goodluck Jonathan. It was unofficial and has since been recalled, but still,

"Why would you name a scholarship after him?"

Then again, why would we name a national holiday after a mass murderer:

BTW- Just saw a program on how the vigilantes that Mr. Good Luck formed to battle Boko Haram are every bit as, if not more, vicious killing innocent people.