Thanks to the invite or Urs Stahel, I'm looking forward to talking at Platform at Paris Photo this year. I have 10 minutes to talk about something, anything and the ideas are brewing in my head.

It will be a rich and heady mix. But I don't know if whatever it is I will talk about will have the effect I intend it to have. Sometimes things just come out and get a life of their own.

That happens with writing and it happens with photography. I think that's possibly happened a bit with this website (h/t Alex at IC Visual Labs and Visualising China).

The website is called Turandot: Chinese Torture/Supplices Chinois and ostensibly the introduction sums up its purpose.

« Chinese torture » is a cliché. That is the visual representation of a prejudice according to which the Chinese singularize by a particular cruelty. Backed by testimonies and photographs, this representation proliferated in literature, art, theater, cinema, etc. The myth for long survived to the facts it was inspired by, and it goes on distorting our perception of Chinese reality.
To seize this polymorphic representation under all aspects, we constituted an international and interdisciplinary team, including specialists in Chinese history, comparative literature, Western and Chinese iconography, photography, etc. This multilingual data basis is a tool for crossing or approaches, and bridge the gap between our fields. This is a way to diffuse our research works, and provide access to our resources for our colleagues. Materials come with a critical apparatus easing their use for research; hyperlinks allow confrontations between resources of diverse kinds, to find out thei references, to link them according to this or that interpretative hypothesis.


So the site details tortures/cruelties and punishments (with incredible photographs reproduced with awful digital quality) as they existed in the 19th and early 20th century, with the cangue and lingchi particularly notable. Lingchi was a kind of death by dismemberment, similar to hanging, drawing and quartering we had in Europe in various forms. 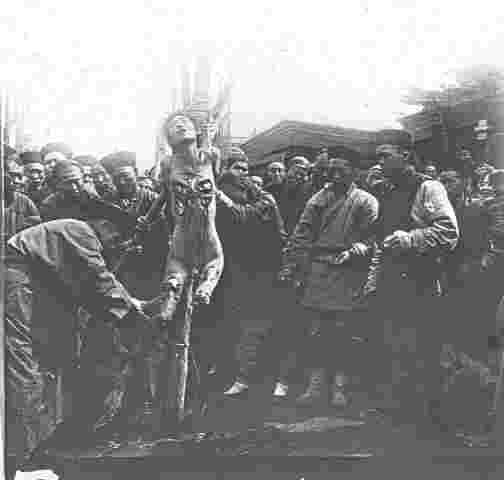 I'm not sure why the quality of the images is so bad - perhaps it's because even though it has the above brief highlighted above, the people behind the website are also aware exactly how these images will be seen and used.

And of course we could look at these pictures then, and still look at them now and wonder at how cruel and uncivilised and alien the Chinese, Iraqi, Congolese, Israelis, Uzbekis or IS are - which justifies our colonisation and dropping of bombs and dehumanisation.

But it can work both ways and it does work both ways. So just as I can read the news and wonder at the cruelties inflicted on others by a variety of global evil-doers, I can also wonder what the websites are that detail the horrors that our bullets and bombs inflict on others.

I'm not sure why these cruelties are always classified in these terms. Why not cut to the chase. This is what powerful males with weapons do? That might address the problem. Remove their power and stop giving them weapons. Then we might stop making excuses for the psychopathology of our leaders. And maybe we would have a better world. But that would be too simple wouldn't it.

Read more about Visualising China and the use of torture and punishments in images here.


And read about the strength and determination of the Chinese here.