Noriko was a Japanese student I once taught, but unlike Michiko (who you can read about in yesterday's post) she came from a position of privileged ignorance. She was lovely and kind and was part of a fantastic class that had Japanese, Greek, Iranian and Chinese students in it. Everybody was incredibly smart, tolerant and generous to each other and Noriko was at the heart of all that kindness.

Then one day, one of the Chinese students was talking about China and where her parents came from in the far north-west, in Manchuria. And that's when Noriko piped up. "Oh, that's Manchuko," she said. "My grandfather was the top general there."

And then there was silence. The Japanese committed horrendous crimes in China including biological and chemical testing as well as having camps where humans were experimented on. This was like happily telling a Jew or a Czech that your grandfather is Dr Mengele or Reinhard Heydrich and expecting them to be happy about it.

But Noriko didn't know this. And this was understood. And so for the next few days, the Chinese student would take her Noriko away and give her a new interpretation of both Japanese and her own family history. And Noriko listened and took it all in, wiser but sadder.

It was a lesson in tolerance and the ability to listen to and understand something very difficult to hear (that had possibly been nestling in the back of Noriko's mind). And maybe it was only something that could happen outside the heated environments of accusation and denial that you might have in China or Japan.

I often think of Noriko and her miraculous ability to grasp something that must have been so personally shattering. I wonder at the ability of both Noriko and the Chinese student to engage with each other on terms that lie outside the usual political discourse, on terms that you will never see in the news or on television.

And sometimes I connect it to something happening in the news, something where the two sides are so diametrically opposed that even as an outsider, one is infected by the driven bile and hatred of one side to the other, bile and hatred that appears to be ubiquitous and all encompassing, but that still has little chinks in, little gaps where there is a willingness to understand and take responsibility for one's own failings and not just blame others, where the humanity of the opposing party is recognised in at least some form - and because of it becomes less of an opposing party.

But maybe that's because when I talk about both sides, I talk about the leadership one sees on TV, or the despicable spokesman who pops up every few years to justify war crimes and murder, or the police state that imposes a culture of violence on its people.

On the few occasions that I see people or words that go beyond this (albeit engrained) rhetoric of opposition and enmity, then I identify more. It might be reading the Fuck Everyone statement by Gaza youth. It goes like this


"Fuck Hamas. Fuck Israel. Fuck Fatah. Fuck UN. Fuck UNWRA. Fuck USA! We, the youth in Gaza, are so fed up with Israel, Hamas, the occupation, the violations of human rights and the indifference of the international community!
"We want to scream and break this wall of silence, injustice and indifference like the Israeli F16s breaking the wall of sound; scream with all the power in our souls in order to release this immense frustration that consumes us because of this fucking situation we live in...

Or it might be watching a film like Lemon Tree, an Israeli-made film that details both the injustices of the West Bank occupation but through the distant relationship between the wife of the Israeli Defence Secretary and a Palestinian lemon farmer.

But the trouble is it's Israel and it's Palestine and so not everything is so illuminating. And that's where we come back to photography and Nick Waplington's brilliantly photographed Settlement.

This is a book that Waplington says shows images '...created between 2008 and 2013, when I photographed over 350 distinct settlements, from populous cities like Ariel to tiny outposts made up of a few caravans. The exact number of settlements cannot be determined with accuracy, as both construction and demolition take place regularly throughout the region. In general, however, the presence of Jewish settlers in the West Bank is entrenched and their building projects continue with the support of the state of Israel.'

No kidding! Settlement is taking a solid, objective tone. Waplington is not trying to untangle the politics of occupation and settlement, he's simply showing it. And there are maps and references to back this up. Settlement is what it is, nothing more and nothing less. Except of course it's not.

Is it possible in such a charged landscape to be neutral, objective? Is there such a thing? I don't think so  but I think the idea of objectivity may be a central element to the book. And that's what makes it so very, very interesting and so very, very difficult.

It's a fantastic book; the landscapes are charged, and the simple family portraits of settlers come with a subtext, a history and a projected future. Some people find them sympathetic, portraits of family who gain strength from each other and do not look outwards. 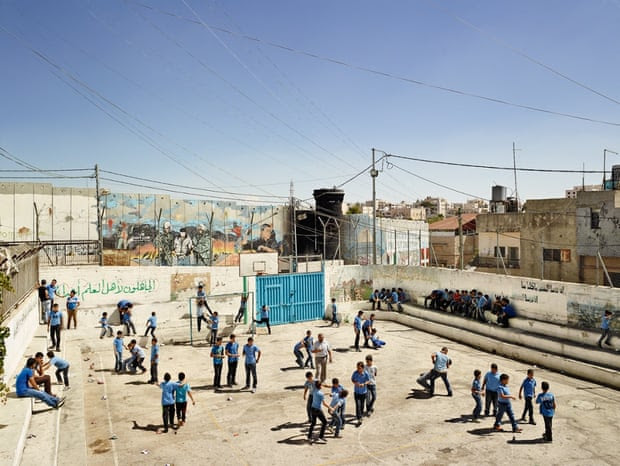 picture above by James Mollison

But I didn't get that feeling whatsoever. I found them hard and brutalised, in the same way I found James Mollison's picture (see above) of a Palestinian school in the West Bank hard and brutalised. I don't know if this is coming from my own very limited background knowledge of the West Bank and what is happening there now, or if Waplington is putting something into the pictures. I think it's probably the former because Waplington does have a sympathy towards the settlers. That might come out to one audience but to another (including this viewer), the portraits are anything but sympathetic.

What it amounts to is quite devastating; a folding over of landscape into power, of religion into family, of control and dominion that combines those elements of pioneering farming with annexation and occupation.

There's no middle ground here though, The people who are photographed are single-minded and will not budge. That's why Waplington has made it in the way he has I guess; as a mapping, of the land and of the people who live there. The future is bleak and it does not blink. Unless you think differently, and then it's all bright and lovely, with a little bit of struggle along the way; The One-State Utopia?
Posted by colin pantall at 09:17

Thanks Mark - I know you have a position on this, so it would be interesting to see what you think of the book. I think it's fantastic. And so's the movie, Lemon Tree!