I went to the cinema last week and the Citroen Cactus advertised. It's got those paddings on the side because they are supposed to make it safer, but it does look like it was cobbled together by someone on a bad acid trip.

And I guess that's the people they're looking to buy it; people whose neurons are so fried that their aesthetic judgements have floated up and mushed with the fairies.

That ties in completely with the soundtrack to the ad - White Rabbit.  I used to like White Rabbit, it's great to sing along to, but now it's been in the Cactus ad, I don't like it so much. The song has changed because of where it has ended up. It's not the song's fault, but what can you do. For the moment, it's a car-selling song.

It's the same with pictures.  Where they end up changes how you see them. That's what these considered thoughts on photographic muzak are all about. Context is everything.

Somebody people try to change the context. And the audience. One thing I quite liked about Paris Photo is you got, as far as it goes, a relatively mixed audience. Photography isn't really one thing, it's lots of things, and that is reflected in what people show, what people look at and what people buy.

At Paris Photo, I remember coming through the door and the first thing I heard were a fetish couple from Birmingham checking out some Araki bondage pictures. "I like the wire marks on this one. What knots did he use for that one? I'd like to try this out."

Which was really nice. But then you turn around and  I see a couple of models who are so glowing with health and joy that they look like youthful versions of Norman Bates' mother. Social x-rays have nothing on this, it's like a well-dressed Day of the Dead. Great.

People from Birmingham and models and me, Let's face facts here. It's a diverse audience and no mistake.

Alright, it's not a diverse audience but I think if you take in all the satellite events and the Mois de la Photo events (thanks to Lucy for reminding me of this. She describes Paris Photo as a 'jewel-encrusted tick' on the body of Mois de la Photo), then the photographic audience in the city for the duration of the fair is as diverse as... er, any photography fair is.

Whatever, I would hazard a guess that every event except the really snotty ones had a more diverse audience than you get at South African art galleries.

Last week, the South African activist group Tokolos-Stencils made an active point about metaphorically gated art spaces in their installation at a Cape Town Gallery. The installation involved putting  a township portable toilet outside the gallery (I think), and opening it up so the stench floated out - the rationale being that it was bringing the townships to the gallery. This didn't go down too well with the gallery and the took it away. 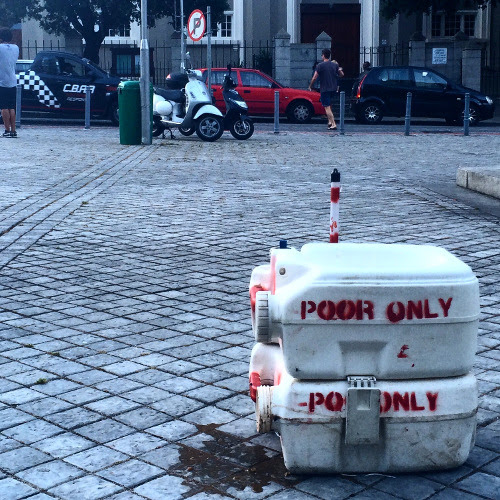 This was the Tokolos rationale.


'While these spaces import artistic works from around the globe which are often times highly critical of prevailing hegemonies, they have illustrated a complete lack of interest in opening the conversation to the black underclass. These sanitary spaces serve not only to exclude the majority of South Africans, but also to reaffirm and sustain the current climate of injustice.

To the professional art world, you can critique but you cannot physically challenge oppression.

Instead of taking the opportunity to invite the oppressed to express their lived experience of impoverishment and struggle, galleries like Brundyn+ continue to fall into the colonial legacy of reifying elite spaces in which black and poor bodies are fetishized for a so-called progressive upper class which has little or no experience with the extreme levels of structural violence that most South Africans live through everyday.'

And this is their intervention on the Mandela Ray Ban funded sculpture/advert. Right on! 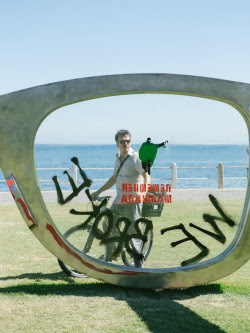 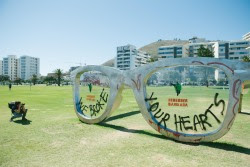 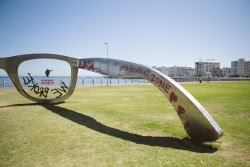 Nobody brought any foul smelling porta-porta to Paris Photo, but there was a giant Jim Goldberg print on the walls of the Pace McGill booth. It was made up of a mosaic of what looked like cheap A4 inkjet prints. It was a picture of  a man standing at the same spot where a friend or relative gotwashed away in a flood (thanks Hester).

I don't know what the point of it was. It wasn't exactly a porta-porta, but maybe it was the nearest equivalent, a nod to the outside world, the one beyond the walls of Paris.