The Blog Goes to Sleep

The blog goes to sleep now for a while. Thank you all for reading. It's been a lovely year!

Happy Christmas, Happy Holidays, Happy New Year to you all.

Tharoul is a small village in Belgium, in the province of Condroz. It's deep Belgium, a rural area full of wheat, swedes and cows. There are not too many big towns in Condroz, but lots of small hamlets and villages filled with cottages, farmhouses, churches and chateaus that, at their oldest, date back to Norman and pre-millenium times.

I went there for three days last week. I was part of a project called Three Days in Tharoul (watch the video here). It's a creative project masterminded by Fabrice Wagner that takes place in a beautiful 18th century farmhouse owned by Philippe Malcorps. It's a beautiful farmhouse in which the minimal, austere 18th century features have been given an overlay of 21st century comfort.

The central idea is that you have three days to make a book, that you collaborate together on, you produce one book that will become part of the house, that will add to the layers of history upon which it is built and create different perspectives of the house, the people, the land. It's a kind of architecture in which the spirit of creativity revitalises a place, gives it energy and life. It's a beautiful idea. It's not really about the book at all. It's about the spirit of togetherness, about creation. It's a pagan ideal. You felt it there.

And it fits perfectly because when you visit Philippe's house in Tharoul that pagan sense of place is ever present. Paul Gaffney was the perfect photographer for the project this year because nobody has that sense of being and place quite like he does. He is unique. I followed him around the fields and the forests around the farm, talked to him about philosophy, photography and life as he shot and felt the instincts taking shape.

It was a challenging situation to work in; Three Days in Tharoul for Paul really meant One Day in Tharoul. He did a couple of shoots, started an edit, did a couple more, did another edit and then did a final one and continued to edit as Fabrice put together the book for printing. The book evolved.

As Paul shot, I wrote. As I wrote, Philippe spoke to Paul and created a signature stamp (made in his forge - a beautiful touch) that would form a central motif to mark on the book. And as Philippe made his stamp, Pierre and Fabrice spoke to Paul and they planned out the mechanics of the book; the paper, the cover, the design. We all chipped in and an energy came to life, a story emerged.

And in between, the flames roared in the incredible fire place, the finest wines available to humanity were brought out of the cellar, there was Belgian beer and an endless supply of meat with an accompaniment of deep classical music both recorded and live via Philippe's incredible hurdy-gurdy (no, I didn't know either) performances. In the kitchen he played for me for 15 minutes. He could have played for 2 hours. I was transported.

It was hard work and challenging with troubles along the way, but somehow all came out good in the end. We made a book. Just one book, a precious beautifully-made book that we all watched Pierre painstakingly create. It was a remarkable fetish. We opened the book at the end of the three days, on the Saturday night before we left Tharoul.

The book stays in Tharoul and becomes part of a place. It was made in a location and it stays in that location. It adds to the embryonic library that was started the previous year, a collection that will build up year on year. It's a mix of slow photography, fast photography and creative dynamism merged with a specific idea of place and very special people; people who were gentle, generous, thoughtful, sensitive and creative. I think the book might be a bit precious in some ways, but I'm happy that it was precious, that there was a huge sense of occasion to its creation.

It was precious but really the book is only a very small part of that. The book crystallizes all that came before; it was the creation that mattered, the Three Days in Tharoul that enriched and enlivened everyone who was there. Three Days that I will never forget as long as I live.

Paul Gaffney
Posted by colin pantall at 07:00 No comments:

As the blog prepares to shut down for Christmas, here's some more bests from the blog (that aren't on my Top 10 list but might have been).


Best Belgian photobook: Max Pinckers and  Will they Sing like Raindrops or Leave me Thirsty - this has some of my words in, otherwise it would be in my top 10

Best Photobook with a Scientific discourse: Yann Lingard and Deposit

Best Photobook from Last Year (that I didn't see until this year): Chris Anderson and Stump

Best English Landscape Book: Andy Sewell and Something Like a Nest

Best Allotment Book that is a photobook: Joachim Brohm and Typology 1979

Best Book about a Burnt-Down Childhood Home: Karin Burghouts and the house of my childhood burned down and I went in to take pictures

Best Song about Photography: Mik Artistic and We've all Been Touched (but not in a dirty way)

Best Documentary Film: Martin Parr and Turkey and Tinsel (see it in Hastings on December 11th)

Best Musical Accompaniment to a Silent Film: Lola Perrin's score for the Wind

Best Photobook Descriptive Title: Karin Burghouts and the house of my childhood burned down and I went in to take pictures


Best Blog Post that I Repeat Every Year: Stop Coveting the Old and Unaffordable

Best Blog Post about a photographer I hadn't heard of before: Paying for Pictures: Prostitutes and the Homeless

Blog Post with most Reads: Documentary and the Dinosaurs, ho hum

There were loads of great photobooks from Ireland last year. Here are my top three Irish books. Eamonn Doyle's i isn't in my top 10 because it looked even better on a wall at Paris Photo. But it's a great book with great, simple pictures that work so well together. Maybe it should be on my list, maybe I made a mistake? I wrote a review of it here. 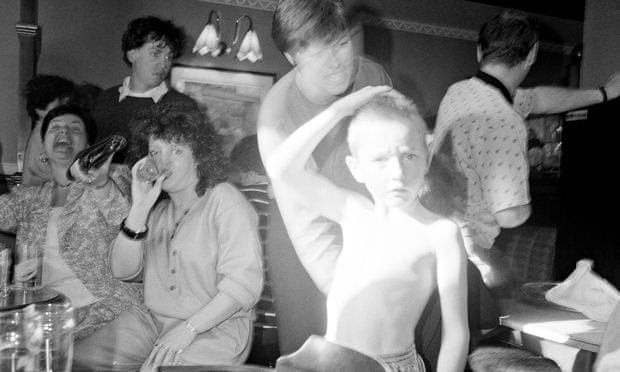 I'm not sure why Ken Grant's book No Pain Whatsoever isn't on my list either and I know, he's not Irish, but he works in Ireland so that counts for the purposes of this post only. No Pain Whatsoever is defining portraiture of a city that hasn't been photographed as much as it should have. Grant's pictures are made from the heart, both his own and that of the communities where he made the pictures and that he lived in and it shows in pictures that have roots that go down into the Liverpool soil. Here's my review of it. And finally a rather neglected book from the year, Kevin Griffin's Omey: Last Man Standing, the story of a former stuntman who is the last remaining resident of Omey Island. I really should have had this on my list too but didn't. I'm not sure why. It's a gorgeous book which is warm and personal with a huge sense of place. Read more here.

It's list time. Rudi Thoemmes of Photobook Bristol got his list in early here  with some gorgeous books including Thomas Kläber's fantastic TANZ.

The BJP has a bunch of lists here.

And  Photo Eye, will have its list up later this month. I love lists but gosh, they do get obscurer by the year. There are small editions, handmade books, random books, gimmick books, books with words, books without words...

It's hard to keep track of it all at times. There are so many great looking books that most people never get to see, so for reviewers the listing becomes a very personal issue that connects to whether they favour poetic, emotional, intellectual, narrative or visual approaches. Or all of them.

Strangely enough there aren't that many books that get on the list that meet the visual impact criteria, that have a visual feast of images that reaches out and goes beyond photography to find a wider audience. You know these books when you show them to a non-photographic audience and they still have their noses in it thirty minutes later and they've pulled in a bunch of other people who are all struggling to have a look. There's one that really hits that spot this year that'll be on my Photoeye list. It's quite amazing that you can show it to people who are not 'interested' in photography and five minutes later they will have their heads up close searching right into the detail of every picture.

Emotion draws people in too, as does the ability to tell a story or make a point directly, to create empathy with the viewer, to make them go deeper into the world beyond the image to the people and places whose ghostly representations inhabit the photobook world.

Ultimately thought, there is something arbitrary about the choices we make. They go with our particular mood at a time, they are shaped by what we have seen recently - publish a book in March and you kind of get forgotten. This year there were so many great books that packed a punch in one way or another. So as the blog is coming to the end of it's winter run, I thought I could include these in my final year round up, a best of list. Another one. Why not?

So first up is Best Souvenir Shopping of 2014. I just took part in the wonderful Three Days in Tharoul workshop in Belgium (more of which later). If you're foreign like me (I'm a Hidden Migrant) and you come to England you might go home with a Big Ben statue, a Beatles t-shirt and a box of shortbread. Which is pretty good by anyone's reckoning.

Go to Belgium and what do you get? Beer, chocolate and Tintin. So the Best Stereotypical Gift Award of 2014 goes to Belgium!
Posted by colin pantall at 08:46 No comments: