It's Jihadi John, not Jihadi Giovanni.

I know there are loads of people who have photographed dust in different forms, and there are those who have well-known dust pictures/projects. And then there are those who don't. I bet there are a fair few people around the world cursing Klaus Pichler for his Dust book (see yesterday's post), saying things like, "but I did that 10 years ago."

Yes, but you didn't make a book of it. And if you did, nobody knows about it. If a tree falls in the woods and nobody hears did it really fall? If a book is made and... er, finish that one yourself. 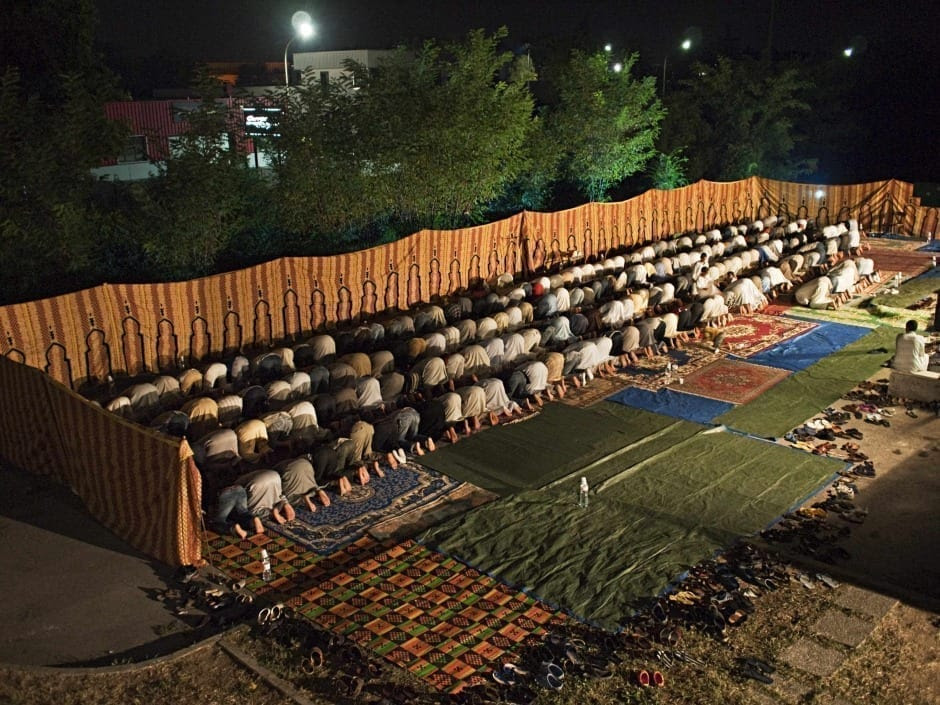 The fact that it came out at the right time, in the right form, with social media, photobook festivals and small but connected circles of book afficionados to power it into people's consciousness did no harm either. Nor did the fact that Degiorgis is smart, committed and hard-working.

And of course, there have been numerous others who have done similar projects. It's all been done before remember. Which is not a problem. Just do it again, but do it different and do it better. Nobody has a copyright on the basic idea of repurposing space because it is a staple of photography.  It always has been.

For example, in London, David Spero did a beautifully photographed project on spaces adapted to christian chapels and churches, of an evangelical bent. You can think of this as similar to the exterior part of the Degiorgis project.

Also in London, Christopher Holt spent 3 years working on a project showing makeshift places turned into places for muslim worship (this is similar to the interior part of the Degiorgis project). He got into Photoworks and the BJP, but it didn't go too far beyond that despite the struggle to gain access and make a project that had value in its own right.

It's a great project, but Degiorgis didn't just combine the interiors and the exteriors of his Hidden Prayer Halls. He also added something new. And in that respect, Degiorgis got there first. That's why he's the go-to-guy for  repurposed places of muslim worship.

It's a fine line between that relative success and the acclaim that Degiorgis received for his work and anonymity. But the truth is Degiorgis had the right subject in the right place. Islam isn't 'hidden' in much of London. It is in Italy. It's Jihadi John, not Jihadi Giovanni. The subject is far more charged in Italy and that comes across in the killer statistic that there are only 8 recognised mosques in Italy. And 2 million muslims! The title sells the story which sells the pictures.

Add to that the design, the support and the obsession with which the project has been pursued and you see why Degiorgis' book came good.

The obsession is still there. Following the first two volumes, Degiorgis also released a book of comments that were made about the project when it appeared on the Guardian website. It's called 479 Comments.

There are more maps in here (they parallel the original Hidden Islam) and there are considerations on what it is to read these comments on the printed page compated to on a website. But still, I think it might be taking the obsession too far. Interesting as it is, it's still 479 comments on a website with all the inaccuracy, neurosis, denial and prejudice that you would expect.. But who am I to say. No way would I have traipsed around Northern Italy for 5 years photographing hidden prayer rooms. Not in a million years. So maybe, Degiorgis has got it right.

There are some humdingers in there. My favourite is:

142: I have found that it is dangerous to have Muslims as neighbours, all those sweet cakes that get passed over the fence play merry hell with your arteries and waistline.

A lucid and inspiring analysis