Laura El-Tantawy: It's very easy to see when something is really good

all pictures by Laura El-Tantawy

In photography, that's a generous percentage. For photobooks, exhibitions, and individual images the percentage of fails is far higher. Most photography is awful and often rather lame. Rather than getting to the heart of things, it becomes a circuitous, self-referential mess that circles a subject and somehow believes that circling is of interest. It's not. This photography is like a wake of vultures hovering over the corpse its own self-regard. That's why the really direct work stands out, the work that looks the world in the face and doesn't bat an eyelid.

More and more work is being made, published, exhibited, shown, and so the theory goes that along with the increase in junk, there's an increase in the quality. That's true, and it could be argued that makes it more difficult to see the quality as hype, market, fashion and clique blur our vision. We're never quite sure what we're seeing most of the time because of the noise from Twitter, Facebook, Instagram and all the rest. Is it cool or is it good?

Except when work is really good. Then who cares about the hype or the market. What's good is good! It's actually very easy to see and the scales of uncertainty fall away.

Laura El-Tantawy's In the Shadow of the Pyramids is really good, good (as Josef Chladek mentioned) to last beyond the end of year lists. It places a mass political uprising into a personal framework, but the personal never takes over. Instead the personal merges into the political. And the political goes beyond the instant euphoria and cliches of the deposing of Mubarak ('Things will never be the same again.') to capture something of the fear and paranoia of life in the long run, and the fact that basically things never changed, they shifted. Thought has gone into the ideas and layout of the book, into the sequencing and the colours, but what makes it so good is the fact that it is about something absolutely vital, concrete and real. And it tells us something new about it.

Here's the review I wrote for Photo Eye.

“There are 90 million people in this country. Ninety million stories to be told. This is the beginning of only one.”

The country is Egypt, the year is 2011 and the Arab Spring is in full flight. Cairo’s Tahrir Square is packed with protestors against the president’s rule and El-Tantawy is in their midst. “In the square of Liberation I found dreamers. Just like in the films. Thousands of them. In Tahrir Square I found myself again.”

If the protestors are dreamers (in more than one sense), that is how the book plays out; like a color-saturated, grain-soaked, ISO-high dream. It’s dreamland all the way as the subdued fearfulness and paranoia of the early images explodes into the cathartic adrenalin rush of the massed crowds in Tahrir Square. They stand in the ranks, flags and banners aloft and fireworks blasting.

But even here, there is suspicion and distrust. People know they are being watched, fear is present, spies are everywhere and new schisms are being formed as the old ones are broken down. This is no peaceful revolution even when bullets aren’t being fired and rocks aren’t being thrown. It’s one where familiar forms of violence and oppression are biding their time beyond the short term, seeking new divisions in which to find an outlet; the uniform or the religion or the party may change but the violence and the power remain the same.

There are people in these crowds who know this. That’s what El-Tantawy picks out, the quiet moments of faces amid the frenzy, and that’s what makes the book stand out as a very special book. It’s a triple edit; the before, the now, and the after, an edit made in the full light of what was to come; the old dictator becoming a new dictator, the oppression shape-shifting into suits and  fatigues, into the subsequent killing and torture that never fit into anything as neat and tidy  sounding as the Arab Spring.

In the Shadow of the Pyramids is a visualisation of a mentality, a picture of a repressive state of mind and what happens when that is manifested through violence and armed force. In the book, the dream becomes a nightmare and the square becomes darker. Barbed wire and shields and barriers are photographed or created by El-Tantawy through her off-kilter framing and use of foregrounds to form visual keyholes. Figures stand ominously in windows and then ranks of police appear on the scene against a backdrop of orange and red.

The faces of the protestors are isolated now. We see their anger and their tears. These are men and women who are shocked by what they have witnessed, as El-Tantawy is shocked by what she has witnessed. “I canvas the square looking for faces that express this revolution,” she writes. “Hope, fear, disappointment, joy, pride. This square has seen it all. I ache when they ache. Cry when they cry. Try to laugh when they try. In their faces I see my own.” 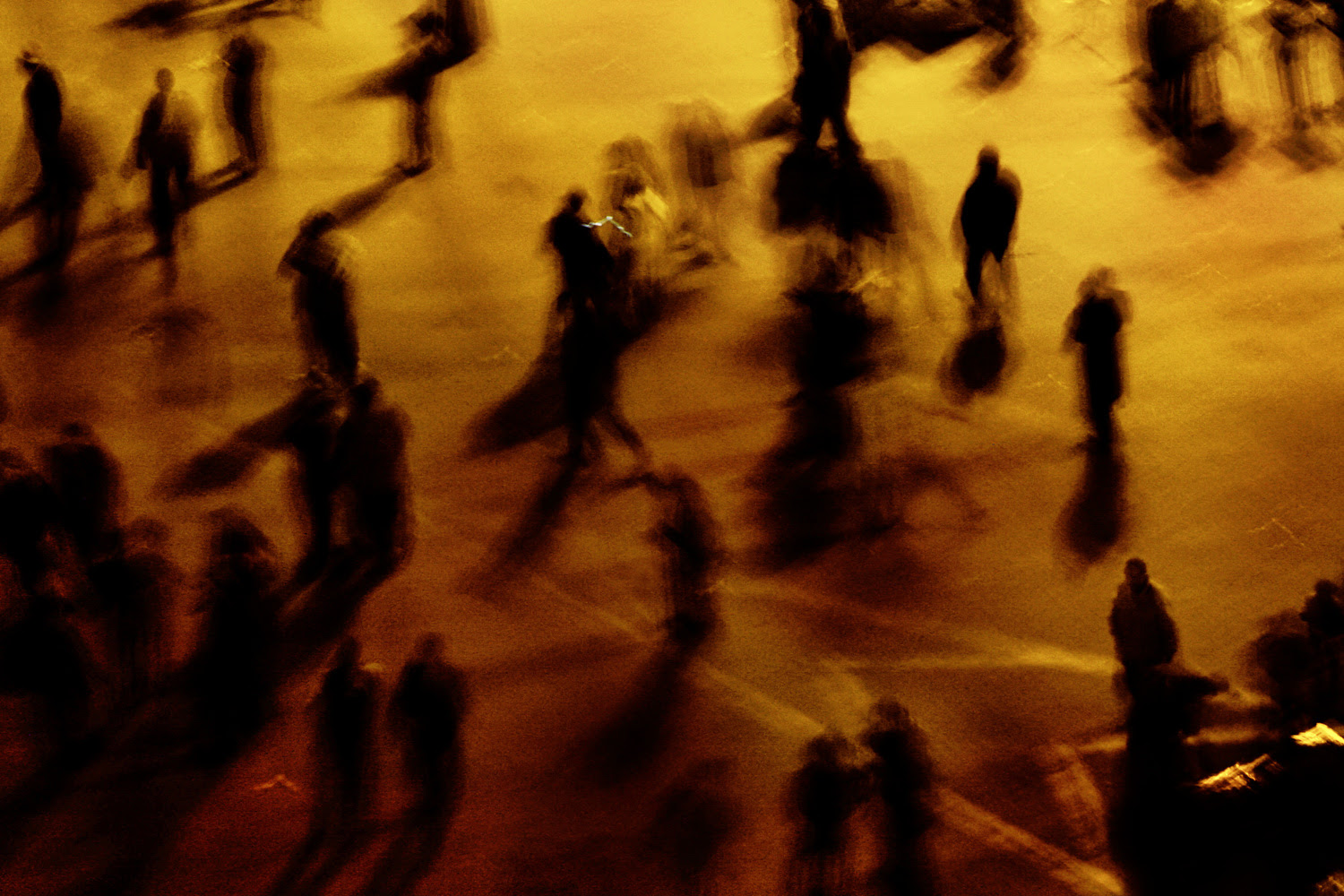 She sees her first body on July 27th 2013. It’s something she doesn’t want to be in this story, in a place that she realizes is no longer home. And then things get concrete with a picture of a pool of blood against a line of police shields and suspicion, separation and fear reigns again. A portrait of Reda, a blind weeping boy, crystallizes that fear and then we’re finished and it’s “over.” The book ends with “normality,” with the pyramids and a couple sitting under a tree. Everything is back the way it was, but what kind of a way is that? On the surface things are normal, but what lies beneath this surface? What is oppressed? What aren’t people saying or showing or feeling?

The phenomenal thing about El-Tantawy’s book is that she captures this subconscious dream-life of a nation where fear and distrust form the basis of everyday life. She tells the story of Tahrir Square but she also visualises a way of thinking and how that affects both herself and a people. And indeed all of us, because In the Shadow of the Pyramids shows what it feels like to live in a place where you’re not free to say what you think or to be who you are. Wherever we live corporate, political, communal, racial, religious or military violence is never too far from the surface. Including in the United States and where I live, in the United Kingdom. Tahrir Square could be anywhere.


And if you're in Bristol tonight (Wednesday 6th May, 2015) come to the M-Shed where I'll be talking with Martin Parr about Industry, Photobooks and much, much more. Talk starts at 7pm.

Hi Colin, As usual a very interesting read and I agree with most of what you have said. At the risk of being accused of pedantry I think it was the science fiction writer Theodore Sturgeon who first said after being asked in about 1957, if 90% of science fiction was crap said that 90% of everything is crap. Sort of become known as Sturgeons Law. I guess Gene Roddenbury was paraphrasing Sturgeons Law !

Thanks Steve - so Roddenbury nicked it from Sturgeon. I like it being Sturgeon's Law though...