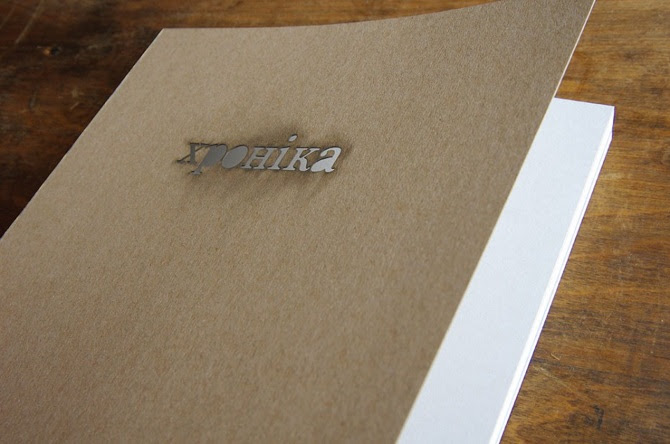 In 2014, Sergiy Lebedynskyy and Vladyslav Krasnoshchok self-published Euromaidan. It was a modest perfect-bound book consisting of images of the demonstrations in Kiev that winter. The book was handmade and when I got my badly folded copy I felt a strange resonance. It was my kind of book, inasmuch as I'm terrible at packing things and I can’t fold paper or do creases very well either.

The pictures inside were great though. It was a classic protest book in the Japanese sense, filled with  images of sturm und drang. It was are-bure-bokeh Kiev and it caused a stir in photobook land that went beyond its modest means.

Now Lebedynskyy and Krasnoshchok have published a new book with Die Nacht. It’s called Chronicle and it sums up their photographic activities as part of the Shilo Group. And this time it’s not a modest affair. It’s stitched at the side (that’s called open thread stitching) as are so many books these days, and the cover is made of simple brown card. But there at the top is the title, laser cut out of its brown surroundings, circled with what looks like brown smoke marks.

Open the pages and there’s a brief introduction by Lebedynskyy that begins. ‘We were taught in school that we were born in the best country and that we were sure to get the victory over everybody else. In a little while the country seized (sic) to exist. It is believed that the 90s were a time of changes and cataclysms, but for us it has all started just now.’

So it’s a book that is about the birth of a country (Ukraine) against a backdrop of the death of a country (the Soviet Union). The pictures were shot over five years between 2010 and 2015 and are divided into 3 chapters, printed on 3 separate paper stocks.

The first chapter looks at pre-Maidan Ukraine, through images from Kharkiv (best known in photography for being Boris Mikhailov’s hometown – the place where he shot Case History). The second looks at the demonstrations in Maidan, Kiev. And the final section looks at the ongoing conflict taking place in Donetsk and Lugansk.

The Kharkiv section is from 2010-2013. It shows black and white pictures of brutalist architecture, farmyards and snow-covered streets. There are stray dogs and telephone wires so the Japanese influence is apparent.

But through all the grain and the mist, there are bare-legged women standing on street corners, weather worn faces, tattoos and chimney stacks. The blacks are not quite black, they’re more grey, the pictures are falling apart and the sad nostalgia (in the picture of the man reading a paper on a subway train for example) is calculated and serves a purpose. Mikhailov is alive in these pages.
The Maidan section shows the events in Kiev from 20th January to 10th February 2014. Here the pictures are printed proper Moriyama style, in full-bleed with deep blacks and grainy whites. So we get the piles of tires, the flames, the smoke and the barricades. It’s a blurry mass of chaos that seems quite familiar.

It might be that it seems too familiar. There is so much blurry graininess around that it has become somewhat trite; the angst-filled equivalent of an Ansel Adams inspired landscape or an Edward Weston copied nude. In Chronicle however, the black and white mannerisms serve a purpose and are also built into the process of making the pictures look so old, and so grimly nostalgic.


The pictures in Chronicle were made on old film bought on ebay, and printed on a Soviet paper called Bromopress - it was discontinued in 1991. The rationale for this process is, says Lebedynsky, that , ‘It is cheap, the process of print development goes on it's own, always unpredictable, with bad "quality". In my opinion this aesthetic just fits perfectly for the place where no progress is made, also where photography is not treated as art, you can not even study it.’

This artlessness is most marked in the final section where the pictures were made in the Donetsk and Lubansk regions from December 2014 – April 2015. Here the paper is grey, the pictures greyer. Here, we’re in wartime and, as with Lens Liebchen’s Stereotypes of War, the Shilo Group are playing to that. Armed soldiers, burned-out buildings and shattered bridges testify to that fact.

It looks great and it's smart, both on the surface and beneath the surface. I get the feeling that, despite all the looking like war, there's a lot going on that I don't have the background to detect, either photographically or politically. It's a fast burner and a slow burner at the same time.