Photographs are very real, though beneath those little pixels or grains of the image are contained the realities of how they were made, modified and distributed (the indexicality of the photograph points in multiple directions).

There may very often be some dishonesty involved in all of that making, modification and distribution, but that is all part of the photographic story. It's not just the image that matters. The picture might be staged, or manipulated, or captioned with an untruth, but that dishonesty is still real and it's part of life. It's all real.

Anyway. I don't think there is anything more real than what the pictures on this post show, the way they were made, and the history they are part of. And I think that the story of how these pictures were made, and how other pictures were made during the Second World War, by people on all sides, are brutally revealing of the multiple functions of photography in all its forms - as accusation and evidence and defiance (in these pictures), but as much, much more besides; pseudo-science, identification, propaganda, as a mark of humanity, of inhumanity, as a trophy, a souvenir, and ultimately, and most brutally, as a marker of life or death.

These pictures are some of the secretly taken pictures of bodies being burnt at Auschwitz-Birkenau in 1944 (the crematoria were so busy burning bodies that day that additional pyres were set up outside the ovens), and of women running towards the gas chambers.

The people who took the pictures were sonderkommando, prisoners detailed to work around the crematoria. This is an extract from Janina Struk's Photographing the Holocaust: Interpretations of the Evidence.


Somewhere about midway through 1944, we decided to take pictures secretly to record our work… From the very beginning, several prisoners from our Sonderkommando were in on my secret: Szlomo Dragon, his brother Josek Dragon, and Alex, a Greek Jew whose surname I do not remember… Some of us were to guard the person taking the pictures. In other words, we were to keep a careful watch for the approach of anyone who did not know the secret, and above all for any SS men moving about in the area…

We all gathered at the western entrance leading from the outside to the gas-chamber of Crematorium V… Alex, the Greek Jew, quickly took out his camera, pointed it towards a heap of burning bodies, and pressed the shutter… Another picture was taken from the other side of the building, where women and men were undressing among the trees. They were from a transport that was to be murdered in the gas-chamber of Crematorium V. 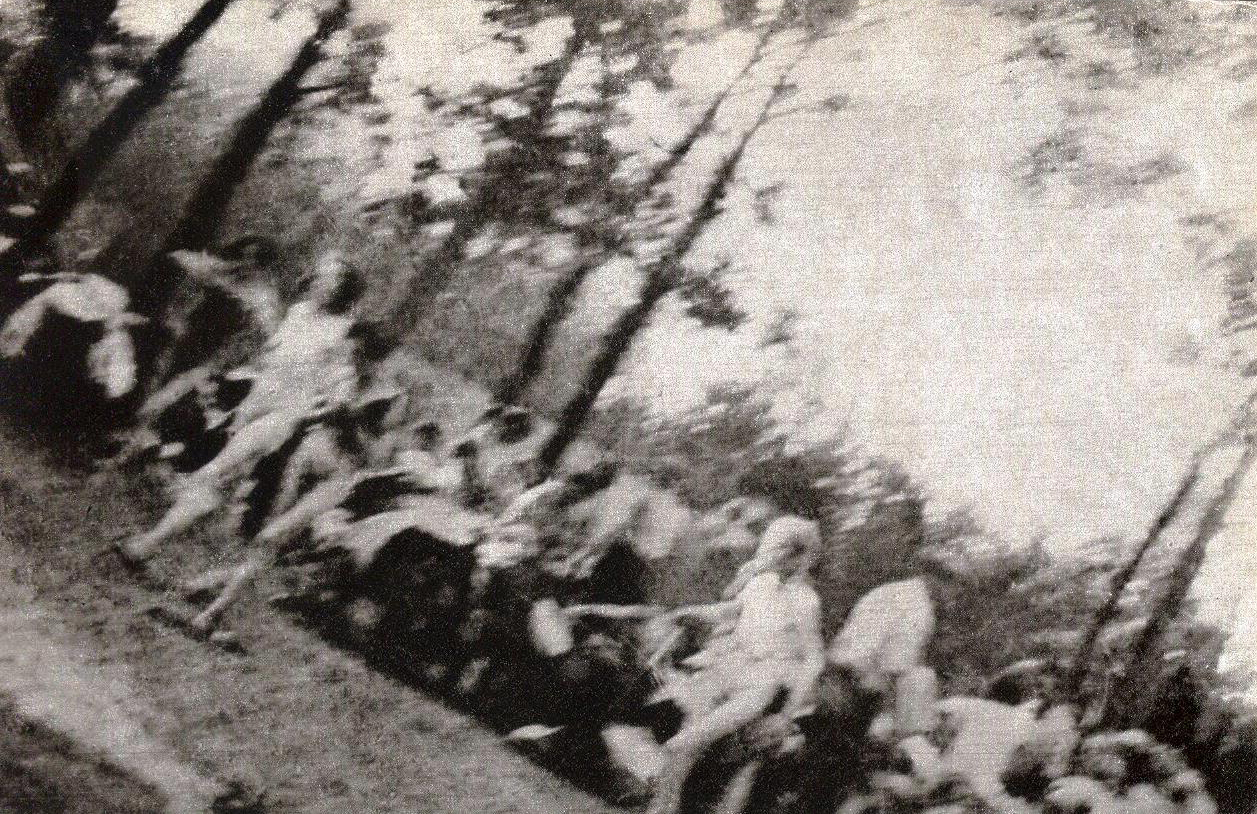 The taking of these photos was featured in the recent film Son of Saul, although it wasn't its main theme or concern. The movie was innovatively shot, and has received considerable praise. Personally, I couldn't appreciate it as much as I wanted to since I agreed with the other sonderkommandos in the movie- the protagonist's actions had "betrayed the living for the dead."

I haven't seen it Stan - I read about it in the Photographing the Holocaust book and then in KL: History of the Camps - where it says that they were all killed soon after and there's not really a hint of that betraying of the living. I'm not sure how much of a sentiment that was in Auschwitz, it doesn't really ring true from anything I've read - where the act of staying alive is something you have to commit to when everything is telling you to do the opposite.

My fault for not explaining the context... The married protagonist finds the body of his girlfriend's son at the gas chamber and then attempts to give it a proper Jewish burial- not exactly the most practical task in a... concentration camp. What he then single mindedly attempts to do endangers the lives of those around him, no matter how far down the clock is ticking- particularly when many of them are actively plotting an escape.

Oh, that sounds a bit of fictional fancy - Nikolas Klausmann talks about the prisoners who tried to stick to religious ritual in his KL book (which is really, really good) - which he confirms the idea that it wasn't practical in more devastating terms.