The Seven Summers of Alevtina and Ludmila

The Seven Summers of Alevtina and Ludmila by Nadia Sablin is rather a lovely book, and one that comes with a backstory. I'll start with that.

The basic drift is that during the Second World War, Nadia Sablin's grandfather was half-blinded during fighting. Excused from his duties he decided to return to the place where he grew up so he could take care of his family better. He dismantled the family house log by log, sailed it upriver to the village of Alekhovshchina where it was put together again.

This became the family home. It's a home that Sablin played in as a child (before emigrating to the USA in 1992 when she was 12 years old) and one that she never thought she'd visit again.

Except she did; to visit her two aunts, Alevtina and Ludmila, who scratch a living from the soil, the woods and the skies of the land that surrounds them. For seven summers, Nablin visited her aunts, asking them to pose for images that capture both  the romantic side of their existence, but also the independence and tenacity needed to survive a life that is led off-the-grid both by necessity and by choice.

It's a familiar story in some ways; there are many photobooks of people living off the land but they always have a distance that Sablin's work does not have, at least not in the same way. It's not that these are super-intimate or revelatory pictures, just that they have a touch of the everyday about them that is not quite there in other work.

A case in point is the picture of the sisters sawing wood. They stand across the frame, one in a headscarf, the other in some kind of patterned cap, and we can see their muscles working, both on their arms but also on the face of the aunt in the foreground, the one without glasses, who I think is Ludmila. 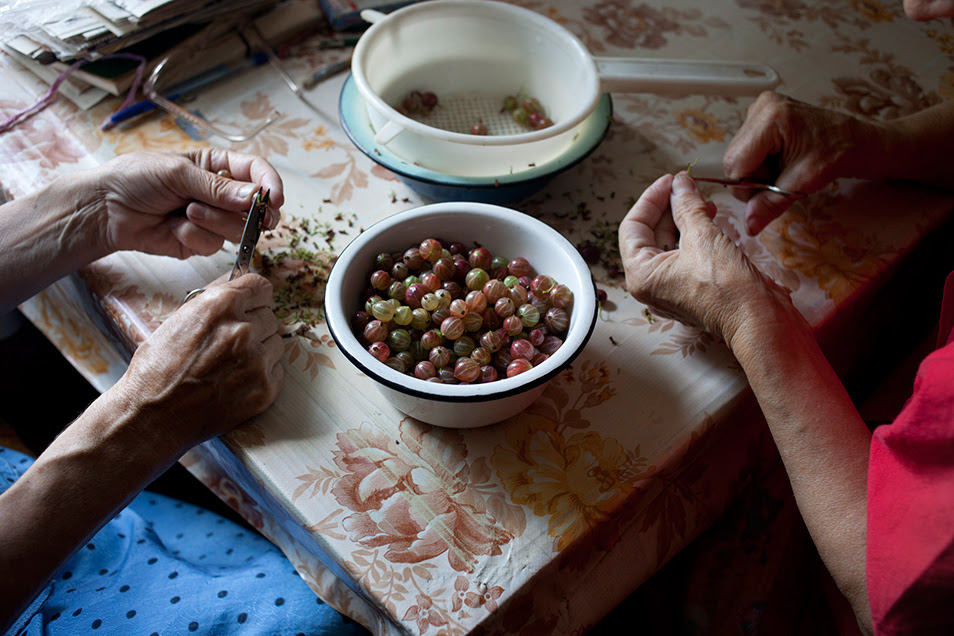 Her jaw is knitted tight and the feeling is that it's to do with Sablin's presence, which is suffered, and suffered without complete gladness. There's work to be got on with and it's not easy. So there's scavenging for wood, there's fruit picking (redcurrants, gooseberries, apples and blackberries all put in an appearance) and there are the semi-staged photographs where Ludmila wears a crown of dandelions or poses in front of the closed curtains, her grey hair falling down over her shoulders an chest.

It's quite a wild existence where the near-pastoral landholding elements like the gorgeous field of fennel or the welcoming kitchen table decorated with the purple shades of some borscht-type beetroot soup, are offset both by the sense of encroaching wildness and a winter so harsh it makes you shiver even to imagine it.

The book was published as a result of Sablin winning the Duke Centre for Documentary Photography  Studies/Honickman First Book Prize in Photography and so is very down-the-line documentary in manner.

It's a lovely story though, told through slice-of-life images that open up little narratives, possibilities and questions but never get bogged down in them. The ambiguities and ambivalences of the lives of the two sisters are never overbalanced one way or another and that is important, and something that is surprisingly difficult to do.

Email ThisBlogThis!Share to TwitterShare to FacebookShare to Pinterest
Labels: aunties, living off the land, nadia sablin, The Seven Summers of Alevtina and Ludmila