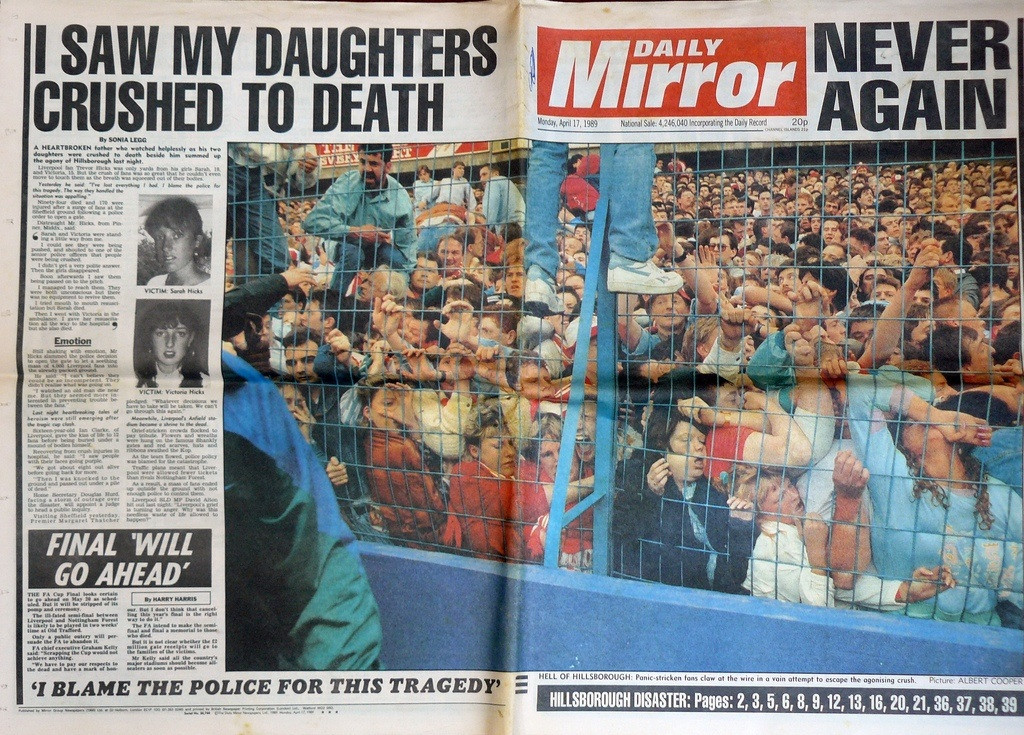 I found the reporting on the Hillsborough Disaster verdict of Unlawful Killing  quite upsetting.

If you're not familiar with the Hillsborough disaster, watch this, or here's a brief summary; in 1989, 96 people died at Hillsborough Stadium in Sheffield while attending a football match.

They were crushed to death when the police opened gates to let in fans who had not gained entry when the game had started.

As people were being crushed to death before the eyes of the stewards, reporters, players and the police, the police beat back fans who were trying to climb the fences against which they were being crushed. Police milled about aimlessly or formed a pointless cordon on the halfway line.

Nobody opened the gates to the fences to relieve the pressure. Nobody knew where the keys were. For thirty minutes or so, people continued to die. No leadership was taken by anyone in the stadium.

As injured fans lay on the pitch, there was no oxygen or other basic resuscitatory equipment in the stadium whatsoever and ambulances and medical staff were mismanaged at the cost of lives.

96 people died. They were Liverpool fans. That matters.

The police took no responsibility for this. They blamed drunken fans. The Sun Newspaper printed lies saying that Liverpool fans stole from and urinated on the bodies of the dead. This was a lie.

The families of the dead only got recognition that the incompetence of the South Yorkshire Police and the officer in charge of the policing of the game for the day, David Duckinfield, were to blame for the disaster.

They were also to blame for the lies, deceit and heartlessness that followed. This was recognised 27 years after the event.

What I found especially shocking was to hear the reports from the day again, reports where the football commentary of Peter Jones came laced with a subtext that this was 'trouble' - with all its connotations of football violence - when this was obviously  not football violence. There was nothing about the movement, the faces, the noise, the atmosphere that suggested it was football violence. It was something quite different.

Another disturbing thing was to hear a doctor express his outrage at the lack of medical supplies, of coordination, and at the fact that people were dying because of neglect and incompetence. And he wasn't doing it 27 years after the event. He was doing it an hour after the event. It was that obvious!

What condemns David Duckinfield and the South Yorkshire Police most are the images of those who died. The picture above shows the faces of Liverpool fans crushed up against the fence. You don't see this when they report the news now. Probably for good reason. But at the same time, I can't help but feel it cuts through all the lies of the police, the lies of the Sun, the lies that it took 27 years for the courts to recognise as Unlawful Killing. And it's not yet a full recognition.

It shows people, including children, dying. It's an awful picture and the people in them have names. I don't know who they are or what happened to them and I feel bad for that. But I think the picture is important because it shows what the players saw, what the stewards saw, and what the police saw. It shows what happened, and it shows people who suffered and died. They aren't others and the picture reclaims them from being others. And they stood by, under the command of David Dukinfield and let those people die. Which amounts to nothing less than murder.

Hillsborough was about reducing people to become something less than people. There was a whole structure of government, of police, of press, of the legal establishment in place to do this. Photography didn't do this. For me, if anything, the picture above doesn't help recover those lost lives, but it does reclaim them from being some kind of alien others, and it does make the responsibility of those in power even more apparent.

Hillsborough was a unique event, with unique lives lost. But the cover-up, and the way in which power conceals its inadequacies and blames the less wealthy and less powerful for disaster, poverty and death is not unique as Ian Jack points out here. So the question remains, if Hillsborough exemplifies the cover-ups, and  the lives that didn't count in 1980s Britain, what are the cover-ups, the deceits and the lives that don't matter of today?

Email ThisBlogThis!Share to TwitterShare to FacebookShare to Pinterest
Labels: david duckinfield, hillsborough, ian jack, regarding the pain of others

Important photographs of record. Horrific too.

I think it is spelt David Duckenfield.

Thank you for telling the story and telling it truthfully. It's almost 30 years so many outside England don't know or remember. May the heavens forever bless the families and supporters of Liverpool for not giving up until the world knew the truth.