Is it Peak Blurry and Grainy Yet


Just when you found about something about Japanese photography and thought that was all you needed to know, along comes something  the Brazilian photographic world view and you realise you haven't got a clue what's going on in the photography world beyond your narrow little corner..

I've reviewed a few books from Brazil including Guilherme Gerais' Galactico and Hart by Laura del Rey, but you get the feeling that there is another huge photographic world beyond this (and that's without even mentioning Salgado, who it's easy to forget is Brazilian).

An example of this is Marcelo Greco and his Sombras Secas. It's a book of black and white images that show the 'second skin' of Sao Paolo, the unconscious block of urban existence that lies a fraction beneath the surface. It comes in full blurry, grainy black and white and it's very good; a representation that is paranoid, lucid and ever-so opaque. It's Sao Paolo in the picture and by bringing forward different elements Greco creates a city that looms over you with a kind of dull, brutalist concrete menace. 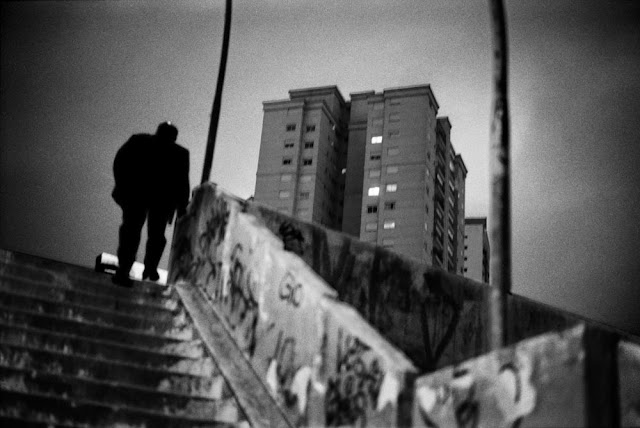 Sometimes there's too much menace and you wonder if it couldn't be reduced even more; 'A Photobook is like a jenga tower' is one of my favourite lines from the lines few weeks. It's something you can always reduce. But take care not to reduce it too much. But that excess is part of the blurred and grainy appeal, the are-bure-bokeh stream of consciousness that so deliciously takes you into the subterranean world that is both grim and somehow glamorous at the same time. They'll be sex and drugs involved in this film noir world but it won't necessarily be good sex and the drugs will be cheap and of dubious parentage; they'll make you see blurry, in black and white too and everything will look kind of worntorn and downtrodden for a while. And can't they tidy those wires up!

There is a whole bunch of blurry, black and white work around and it's getting blacker. I wonder if we aren't reaching peak blackness, or peak blurriness, or peak graininess but I must say I always enjoy it when I see it, despite thinking perhaps I shouldn't. And there are people who are taking it into all sorts of different corners; Paul Gaffney, Awoiska van der Molen, Katrin Koening, Sarker Protick and so on. And that makes things interesting.